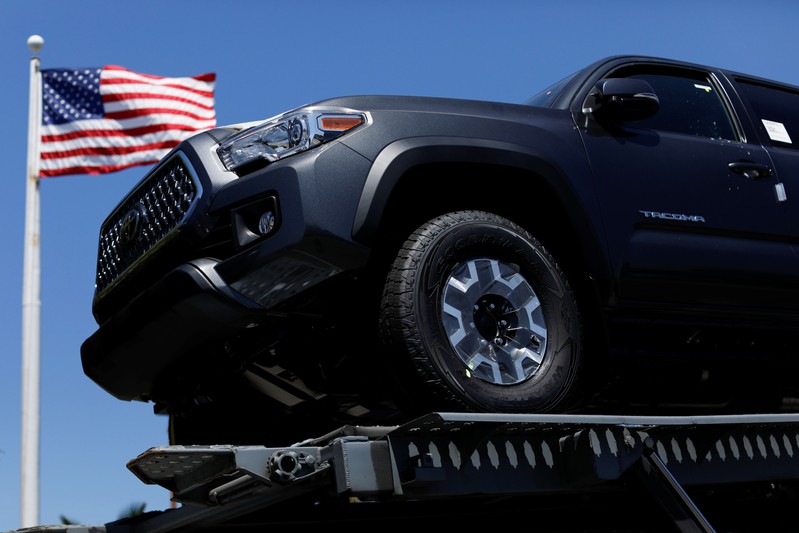 Toyota trucks are shown on a car carrier for delivery after arriving in the United States in National City, California, U.S. June 27, 2018. REUTERS/Mike Blake

The co-owner and chief executive of RoMan Manufacturing Inc, which makes transformers and glass-molding equipment for automakers and other industries, asks callers on his voicemail: "What have you done today to support U.S. manufacturing?"

His procurement team has been under long-standing orders to source all parts and materials as near as possible to his western Michigan factory, even with President Donald Trump's tariffs on steel and aluminum.

But with those tariffs dragging into a new year and steel comprising a quarter of RoMan's fixed costs, Roth says his company has now begun the lengthy process of switching from its U.S. suppliers to an Israeli company for a key component for its products.

It is a strategic decision that RoMan and other auto suppliers have put off since the tariffs kicked in last spring. With tariffs firmly part of the landscape, some are now starting to shift their own supply chain to keep costs in check, according to more than a dozen interviews with U.S. auto suppliers and industry consultants.

The choice is stark for most suppliers: absorb the extra cost, pass them on to customers or find ways to slash material costs.

The transformers Roth's 150 workers at RoMan produce require a magnetized steel core that is now more expensive as tariffs have allowed U.S. steel producers to raise prices. The Israeli supplier has access to cheaper steel and its cores qualify as finished products, so they are not subject to tariffs - making them a cheaper alternative.

"We don't have the money to buy our way out problems like this," Roth said of RoMan, which has annual revenue of around $35 million. "In the long run we can't afford to absorb the extra cost of tariffs."

Roth says he appreciates the sentiment behind Trump's push to bring back American manufacturers jobs, but adds tariffs are "the wrong tool" because they hurt U.S. firms.

Trade consulting firm Trade Partnership Worldwide LLC estimated last summer metals tariffs could cost 5,000 jobs in the U.S. auto industry and 400,000 jobs overall - 16 jobs lost for every steel or aluminum worker hired. But so far there is little data available on how tariffs affect businesses such as RoMan because the process of switching suppliers is a long one and many manufacturers have muddled through so far.

Steven Wybo, a managing director at consultancy Conway MacKenzie, said "every single auto supplier we are working with has concerns around tariffs," and he worries they come at an already challenging time for the sector.

Suppliers are gearing up for a large number of vehicle launches over the next three years, an expensive business, while also bracing for an expected decline in U.S. new vehicle sales. And some in the sector will bear the brunt of restructuring at Ford Motor Co (NYSE: F) General Motors Co (NYSE: GM), which are dropping less-popular sedan models.

Adding tariffs to the mix can require a creative approach.

RoMan, for instance, splits half of a 10 percent tariff with a Chinese customer on transformers subject to retaliatory measures against U.S. manufacturers. RoMan will raise some prices 2 percent this month to partially offset rising copper prices.

Warren, Michigan-based Eckhart Inc - which books about $100 million in annual sales by building robots and automated tools for GM, Volvo and Tesla Inc (NASDAQ: TSLA) and other automakers - must absorb the tariffs or run the risk of losing out in competitive bids.

So Eckhart has focused on cutting costs, including rolling out a new U.S. purchasing system for raw materials, CEO Andrew Storm said.

"We have to fight for every single dollar of revenue that comes in the door," Storm said. "So we find ways to eat the extra cost."

That is why RoMan is seeking alternative suppliers to cut costs - and it takes a long time to ensure a new supplier is financially sound and can consistently hit industry standards. Months into that process, RoMan is only now validating test parts produced by its potential new Israeli supplier.

"You can't turn your supply chain on a dime," said Kristin Dziczek, vice president of industry, labor and economics at the Center for Automotive Research (CAR).

Dziczek said she gets calls "all the time" from suppliers wondering whether to overhaul their supply chain, and yet worrying that if they do, Trump may reverse policy overnight.

The issue stretches up and down the supply chain for cars. Ford and GM have already warned metals tariffs will cost them $1 billion each in profits, setting in motion a complex dance over who foots the bill.

If automakers have to cover the cost, they typically raise vehicle prices to pass it onto consumers. Just this week, a Toyota Motor Corp <7203.T> executive said industry wide tariffs have increased the average U.S. vehicle price by around $600.

Problems at a single supplier can be disastrous, as Ford discovered last May when a fire at a supplier halted production of some highly-profitable pickup trucks.

Some suppliers have adapted quickly to cut costs.

They have cost Gentherm Inc (NASDAQ: THRM), which makes climate control systems for vehicles and had revenue of close to $1 billion in 2017, a "few million" dollars, according to CEO Phil Eyler.

That's the case for Grand Rapids, Michigan-based Pridgeon & Clay, which supplies stamped steel and stainless steel parts to automakers, with annual revenue of more than $350 million.

Third-generation owner Kevin Clay has lost business to low-cost overseas competitors in India who use cheaper tariff-free steel, and whose finished products are not subject to Trump's U.S. tariffs.

Metal tariffs have shaved 25 percent off Clay's pre-tax profit. Banks still wary of his sector following the Great Recession are growing reluctant to issue loans, and his company has mothballed some spending plans and cut staff more than usual for this time of year, according to Clay.

"These tariffs have cost me business," said Clay, who describes himself as a moderate conservative who fervently believes in free trade. "If the aim is to get to a tariff-free world, this is a crappy way to get there."