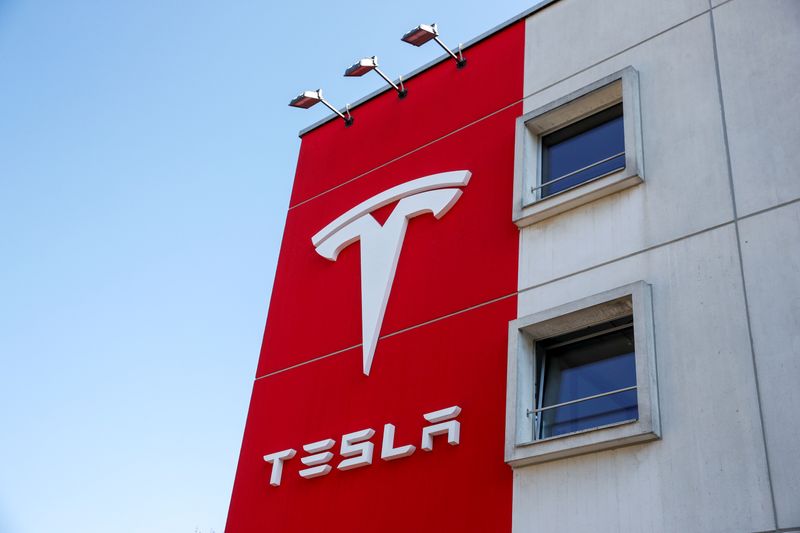 FILE PHOTO: The logo of Tesla is seen at a branch office in Bern, Switzerland March 25, 2020. REUTERS/Arnd Wiegmann

(Reuters) - Shares of Tesla (NASDAQ: TSLA) tumbled 7% in extended trade on Friday after the electric car maker was excluded from a group of companies being added to the S&P 500, among them Etsy, whose stock market value is less than a 20th of Tesla's.

The decision by S&P Dow Jones Indices is a blow to Tesla investors who widely expected the company to join the benchmark stock index after a blockbuster quarterly report in July cleared a major hurdle for its potential inclusion.

S&P Dow Jones Indices senior index analyst Howard Silverblatt declined to say why Tesla was not added to the S&P 500, which is tracked by index funds with at least $4.4 trillion in assets.

"The market is continuously changing, and we need to reflect that in our indices," Silverblatt said.

With a market capitalization over $370 billion, Tesla is one of the most valuable companies on Wall Street. Even after a 16% drop in its share price from record highs this week, Tesla remains more valuable than 95% of the S&P 500's existing components, including Johnson & Johnson (NYSE: JNJ) and Procter & Gamble (NYSE: PG).

Etsy, Teradyne and Catalent have a combined stock market value of about $40 billion.

Tesla, which is up nearly 400% so far in 2020, is among the most loved - and hated - stocks on Wall Street. It is the U.S. stock marketâs highest-profile bet on the rise of renewable energy and the decline of fossil fuels, and Teslaâs Model 3 sedan has made major inroads among consumers.

Its recent stock gains have been driven by Tesla's unexpectedly strong quarterly results released in July, as well as by bets that it would be added to the S&P 500, which would trigger massive demand for its shares from index funds that track the benchmark.

Short sellers are betting $24 billion that Teslaâs shares will fall, among the largest short levels on record for a U.S. company, in dollars, according to S3 Partners.