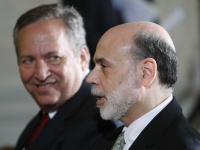 In an event Sunday that will likely be very market pleasing, controversial Federal Reserve Chairman pick Larry Summers has withdrawn his name for consideration for the important job of replacing Ben Bernanke. The withdrawal comes as rumors have been rampant that Mr. Summers would be named by President Obama as soon as this week.

"I have reluctantly concluded that any possible confirmation process for me would be acrimonious and would not serve the interests of the Federal Reserve, the Administration, or ultimately, the interests of the nation's ongoing economic recovery," Summer said in a letter to President Obama.

Obama, meanwhile, praised Summers for his past service during the credit crisis and said he would consult him in the future about important economic decisions.

With Summers out of contention, Janet Yellen emerges as the clear front-runner for the job. Ms. Yellen has been at the FOMC since 2004, made a prescient call in 2007 about frothiness in markets, and has worked hand and hand with Mr. Bernanke.

In addition to the Mr. Bernanke's replacement, other big news this week comes in the form of potential Fed tapering of qualitative easing. The Fed could pull the reins back for the first time on its $85 billion monthly bond buying program. A haircut of $10 billion in widely expected.