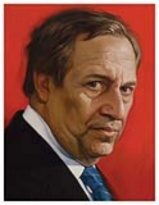 
Lawrence (Larry) Summers is an American economist and the Director of the White House's National Economic Council for President Barack Obama. Summers was the Charles W. Eliot University Professor at Harvard University's Kennedy School of Government. He is the 1993 recipient of the John Bates Clark Medal for his work in several fields of economics and was Secretary of the Treasury for the last year and a half of the Clinton Administration.