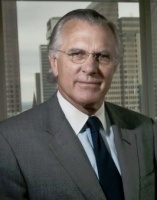 Federal Reserve Bank of Dallas president Richard Fisher thinks that the White House completely botched the nomination of its next Fed chairman.

Speaking at an event in San Antino, Texas, Fisher said, The White House has mishandled this terribly...This should not be a public debate...we came within an inch of our lives of losing the independence that we have.

Fisher said that the Fed should never be a political instrument.