U.S. stocks advance as some states reopen for business 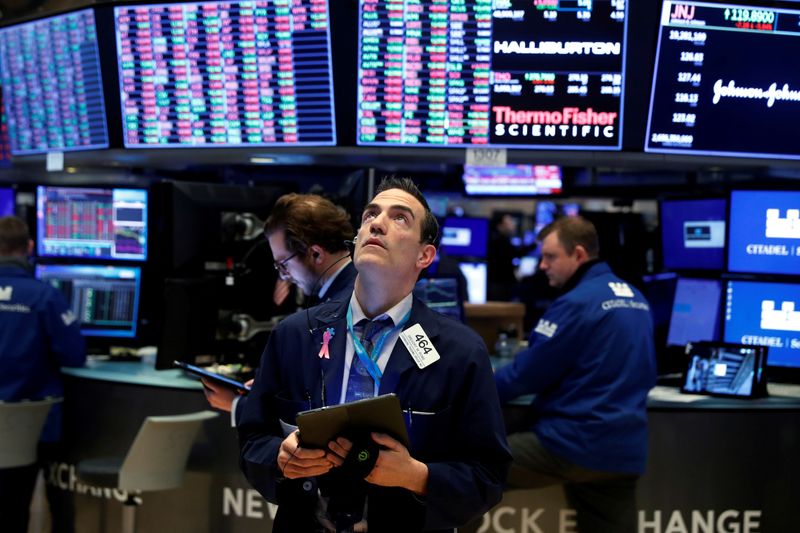 NEW YORK (Reuters) - Wall Street gained more than 1% on Monday at the onset of a hectic earnings week, as investors turned a hopeful eye toward several U.S. states that are relaxing shutdown restrictions put in place to curb the spread of the COVID-19 pandemic.

All three major U.S. stock averages advanced, and are all now within 20% of their record closing highs reached in February, with the benchmark S&P 500 on track for its best month since 1987, after trillions of stimulus dollars helped U.S. equities claw back much of the ground lost since the coronavirus crisis brought the economy to a grinding halt.

But some analysts believe gains may be limited unless there is progress in finding treatments for the disease.

Several states have begun easing stay-at-home restrictions, in efforts to revive economies and get Americans back to work following crushing job losses.

"In general, I think the steps state governors are taking are the right ones and are measured and careful," said Oliver Pursche, independent asset adviser in New York.

But Pursche cautioned against expecting a quick, 'v-shaped' economic recovery.

"If we start reopening tomorrow and there's no big second wave of infections, I still think it's 6 to 12 months at least until everything is back to normal," Pursche said. "It's much easier to hit 'stop' on an economy than it is to press 'start.'"

Economists expect first-quarter U.S. GDP to have shrunk at a 4% annualized rate when the Commerce Department releases its report on Wednesday.

Market participants will also pay close attention to the U.S. Federal Reserve when it concludes its monetary policy meeting on Wednesday.

Analysts expect first-quarter S&P 500 earnings to have fallen 15% from last year, a dramatic reversal from the 6.3% year-on-year growth forecast at the start of the year, according to Refinitiv data.

The U.S. Supreme Court ruled in favor of health insurers seeking Obamacare payments from the government. The S&P 1500 Managed Care index <.SPCOMHMO> was up 1.1%.

Tesla Inc (NASDAQ: TSLA) jumped 10.1% and gave the Nasdaq its biggest boost after a report said the company was calling some workers back to its California vehicle-assembly plant next week.

Crude oil prices, under pressure amid a supply glut and plunging demand, plummeted 23.3%.

Advancing issues outnumbered declining ones on the NYSE by a 3.36-to-1 ratio; on Nasdaq, a 3.66-to-1 ratio favored advancers.

Volume on U.S. exchanges was 10.64 billion shares, compared with the 12.35 billion average over the last 20 trading days.