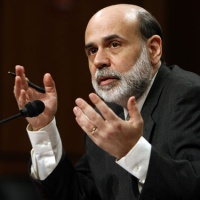 As President Obama will seek Congressional approval to use military force in Syria, the debate on the matter could delay one of the most important upcoming market events - the nomination of the next Federal Reserve Chairman.

Compass Points' Isaac Boltansky said the Syria debate pushes the announcement of Ben Bernanke replace to the end of September or early October.

"We doubt that the President will announce his nominee to head the Federal Reserve while his administration has the full-court press on for Syria," Boltansky said. "Therefore, we do not expect the White House to announce its Federal Reserve Chair nominee until the week of September 16 at the earliest.

Janet Yellen and Larry Summers are seen as the most likely nominees.

In addition to Ben Bernanke's replacement, the Syrian debate also reinforces Boltansky pessimism regarding Rep. Mel Wattâs nomination to head the FHFA. "We expect the White House to expend a considerable amount of political capital in the upcoming debate over the use of military force in Syria which lessens its capacity to force other issues such as Rep. Wattâs nomination to head the FHFA," he said. "We have remained pessimistic regarding Rep. Wattâs nomination due to a number of factors and note that the lessening of President Obama's political capital due to the Syria debate reinforces our view that Rep. Watt will not become FHFA Director."

On the fiscal fight issue, Boltansky said the ongoing debate regarding Syria on Capitol Hill increases the likelihood that lawmakers punt on both the budget and the debt ceiling which would set up another fiscal fight at the end of 2013.