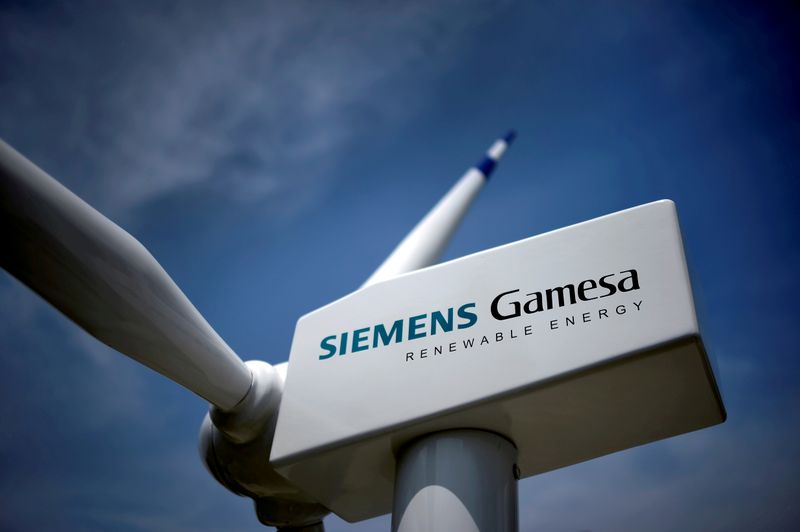 FILE PHOTO: A model of a wind turbine with the Siemens Gamesa logo is displayed outside the annual general shareholders meeting in Zamudio, Spain, June 20, 2017. REUTERS/Vincent West/File Photo

COPENHAGEN (Reuters) - The head of Siemens Gamesa warned on Wednesday that a decade-long race to bring down the cost of generating wind power could not continue, as it would reduce the financial muscle of turbine producers to continue investing in new technologies.

A boom in investments in green energy to address climate change has helped bring down the cost of wind power to a level where it can compete with fossil fuels like coal and natural gas.

"What we've clearly achieved is that wind power is now cheaper than anything else. But I believe we shouldn't make it too cheap," Chief Executive Andreas Nauen told Reuters.

In Europe, wind and solar currently are significantly cheaper than coal, natural gas and nuclear power, according to Bernstein research.

Demand for wind turbines is at a record high, driven by the green transition, but lower prices and increased competition have squeezed margins.

"We have probably driven it too far," Nauen said. The industry's ability to keep investing in new technologies and factories will be reduced if the drive to cut the cost wind power continues at the same rate, he added.

Wind turbine makers' operating margins are also being squeezed by rising costs stemming from the supply crunch and high prices for raw material such as steel.

Both Siemens Gamesa and its main rival Vestas have said they have been able to pass on part of the higher costs to customers, which is likely to be reflected in higher auction prices and power purchase agreements over time.

Earlier this month Vestas slashed its 2021 outlook for a second time this year, and now expects an operating profit margin of 4% versus 5-7% previously - a far cry from its long-term target of a 10% margin.

Governments around the world are phasing out generous wind subsidies, opting for more competitive contract tenders, and favouring project developers that submit the lowest bids.

"We need to change auction systems in the future," Nauen said. He suggested criteria such as local job creation should be considered instead of focusing only on price.