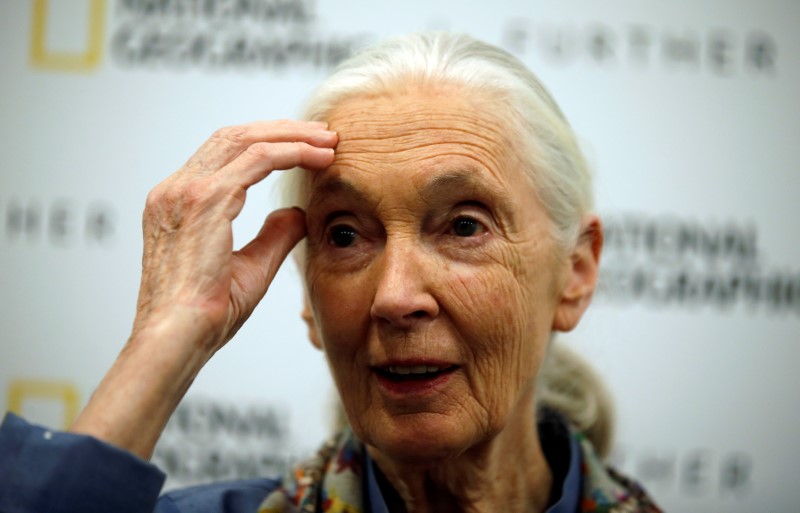 FILE PHOTO - Conservationist and primatologist Jane Goodall speaks during a news conference at the National Geographic summit in Lisbon, Portugal May 25, 2017. REUTERS/Rafael Marchante

NEW YORK (Reuters) - While top scientists may be deploying their brainpower on critical projects such as climate change research and conservation, they often entered the workforce in far more modest ways.

For Reuters' monthly 'First Jobs' series, we chatted with a few leading scientists about how they got their starts.

"When I left school, we had no money for university, but just enough for a boring secretarial course. Before getting a 'proper' job, I had a part-time job working for my aunt who ran the children's orthopedic clinic. Twice a week the orthopedic surgeon came to examine patients, and my job was to take down his notes shorthand, and then type them out. This gave me a profound understanding and empathy for those with physical disabilities (there was much polio, club feet - and even rickets - back then).

"My next job was a secretarial job involving a lot of filing at the Registry Office at Oxford University. And then came transfer to London to work at Stanley Schofield Productions on Bond Street. We made advertising films, and my job was to choose the music. But I also learned makeup. My masterpiece was to paint the seam of a non-existent stocking on the bare leg of an actress!

"When invited to Africa, I earned money by being a waitress in a hotel around the corner from my home in Bournemouth - very hard work indeed. And the last job prior to my career was to be secretary for Louis Leakey at the Natural History Museum in Nairobi. So the boring secretarial course was certainly worth it in the end!"

"I was around 13, and after school I would go to the Westchester Square library in the Bronx. My job was to shelve books, so I got very familiar with authors of great literature.

"I remember one time I was waiting for the bus after my shift, at around 6 at night, and saw a bright star in the sky.

"During World War Two, my father was in a relocation camp for four years. After the camp opened up, there weren't many jobs for Japanese-Americans. But there were some gardening jobs opening up, because the suburbs were spreading. So he would take me along, and I would mow lawns and water plants and carry fertilizer.

"As a child I basically had a choice of two paths: One, my father wanted me to take over the gardening business. And two, I wanted to become a physicist. After that gardening job, I decided I would much rather work with my mind.

"When I was in the third grade, one of my sisters gave me about 10 of her customers on her paper route. After school I would deliver the Omaha World Herald to them.

"The World Herald cost 25 cents for the six weekdays, plus 15 cents for Sunday. I made 5/6 of a cent per day per customer, and three cents on Sunday - provided that I collected.

"When my earning reached a dollar, I would convert it to a silver dollar (there were still a lot in circulation in 1950) and put it in a tall can. I saved most of the money, but did buy a Radio Flyer red wagon for $9, and later a bicycle.

"By the time I graduated from high school I had saved $1,900. That helped me graduate from college with no student debt."

(This version of the story has been refiled to fix typo in the seventh paragraph.)