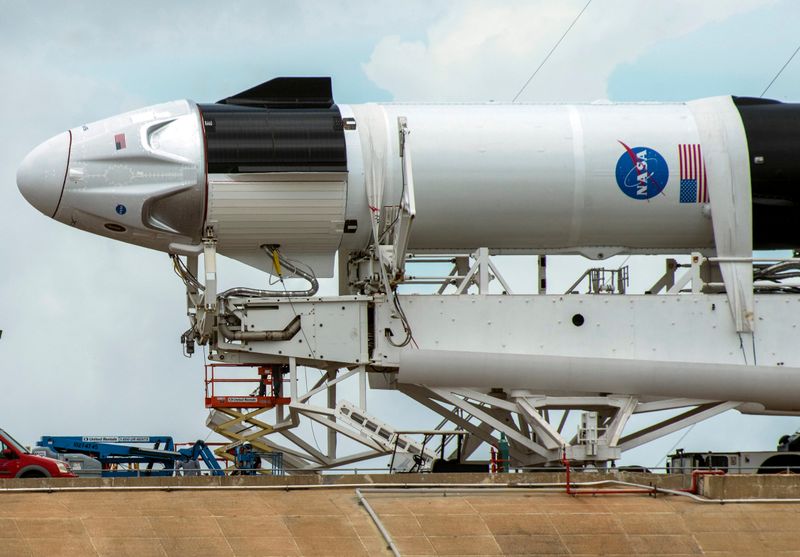 FILE PHOTO: Crews work on the SpaceX Crew Dragon, attached to a Falcon 9 booster rocket, as it sits horizontal on Pad39A at the Kennedy Space Center in Cape Canaveral, Florida, U.S. May 26, 2020. REUTERS/Steve Nesius

CAPE CANAVERAL, Fla. (Reuters) - Stormy weather thwarted a landmark moment for private rocket company SpaceX and NASA on Wednesday, forcing launch directors in Florida to postpone what would have been the first flight of U.S. astronauts into orbit from American soil in nine years.

The countdown, made especially suspenseful by shifting weather conditions, was halted just 16 minutes and 54 seconds before the SpaceX Falcon 9 rocket had been due to launch astronauts Doug Hurley and Bob Behnken on a 19-hour ride to the International Space Station.

SpaceX will make a second attempt on Saturday afternoon to launch the astronauts aboard its newly designed Dragon Crew capsule.

In the end, it was an electrically charged atmosphere, literally, that prompted SpaceX and NASA to scrub the launch, even as the rocket was being loaded with fuel.

"There wasn't really a lightning storm, but there was a concern that if we did launch it could trigger lightning," NASA chief Jim Bridenstine explained afterwards.

Launch director Mike Taylor cited a number of unspecified "weather violations" for halting the mission, capping a day of intermittent showers and a tornado warning.

"This was an important milestone, just today," he said on NASA TV. "We learn a lot every time we do these things."

Hurley, 53, and Behnken, 49, had been strapped into their seats for a little over two hours before the launch was called off. NASA's broadcast on the internet showed the two men seated side by side in helmeted white flight suits as the postponement was announced.

"Everybody did great today. It was a great practice, and we'll do it again on Saturday," Hurley said just before climbing out of the capsule.

Technicians in black suits and face masks then escorted the two astronauts back down the 265-foot-tall (80-meter) launch tower for the return trip to their quarantine holding facility.

The astronauts were to have blasted off from the same launch pad used in 2011 by NASA's final space shuttle flight, which was piloted by Hurley. Since then, NASA astronauts have had to hitch rides into orbit aboard Russia's Soyuz spacecraft.

For Musk, who is also CEO of electric carmaker Tesla Inc (NASDAQ: TSLA), the first manned SpaceX launch represents another milestone for the reusable rockets his company pioneered to make space flight less costly. SpaceX, founded by Musk in 2002 and formally known as Space Exploration Technologies, has never previously flown humans into orbit, only cargo.

It also would mark the first time commercially developed space vehicles - owned and operated by a private entity rather than NASA - have carried Americans into orbit.

The last time NASA launched astronauts into space aboard a brand new vehicle was four decades ago at the outset of the shuttle program.

The two astronauts are NASA employees under contract to fly with Hawthorne, California-based SpaceX. Plans call for them to remain at the space station for several weeks, assisting a short-handed crew aboard the orbital laboratory.

Wednesday's outcome was a disappointment for Trump, who made the trip to Florida for what he hoped would showcase a triumphant moment for America as the nation battles the coronavirus pandemic.

The president left Cape Canaveral shortly after the countdown was halted but said he would return on Saturday.