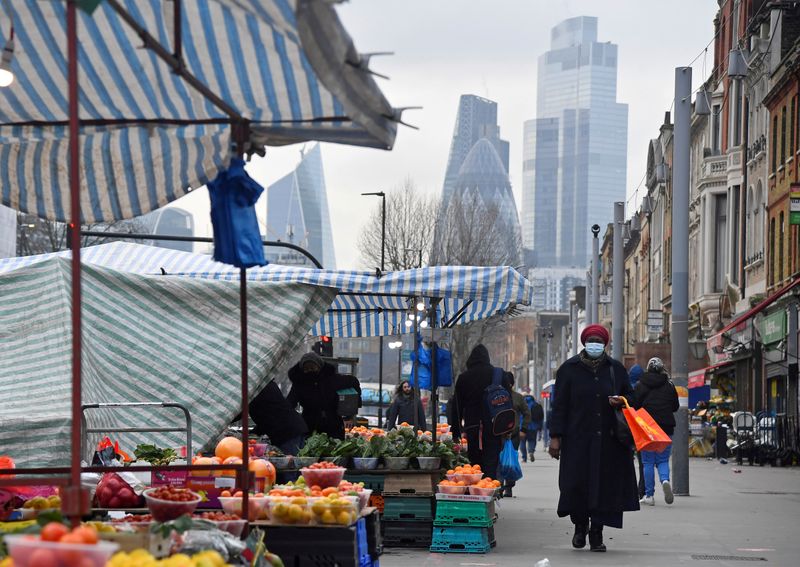 LONDON (Reuters) - British consumers cut back heavily on spending as they spent a second month in a COVID-19 lockdown in February but confidence in the economy hit a 12-month high, payment card firm Barclaycard said on Tuesday.

Consumer spending was 13.8% lower than a year before, similar to January's plunge of around 16%, Barclaycard said.

Spending on essential items grew 5.3% and online grocery shopping surged. But spending on non-essentials plummeted 22.1% with many businesses still closed.

After suffering its biggest slump in three centuries last year, Britain's economy is expected to grow strongly once the COVID restrictions are lifted between now and late June.

Barclaycard said a survey which it had commissioned showed consumers' confidence in the wider economy rose by 4 percentage points to 28%, its highest point since the pandemic hit last year.

Many people were thinking about where to spend the savings they had racked up while stuck at home. A fifth of those who had saved more than normal said they would take a big holiday and 13% planned treats for themselves.

The survey of 2,003 people was conducted between Feb. 19 and Feb. 22, before finance minister Rishi Sunak announced an extension of support for households and businesses in a new budget plan last week.

The Bank of England is watching to see how much of the big increase in household savings is spent as it tries to gauge the likely strength of the economy's bounce-back.

A separate survey published on Tuesday by the British Retail Consortium (BRC) trade body also showed how households, for now at least, were focusing their spending on essential items.

Its measure of overall retail spending at major retail chains rose by 1.0% in February compared with the same month last year, faster than the average growth rate of 0.6% in the past three months.

Over the three months to February, total food sales increased 7.9% but sales of non-food items fell by 5.5%.

"Conditions will continue to be incredibly challenging as they face subdued demand, thinner margins and rising logistics costs, alongside the accelerated structural changes to the sector," Martin said.