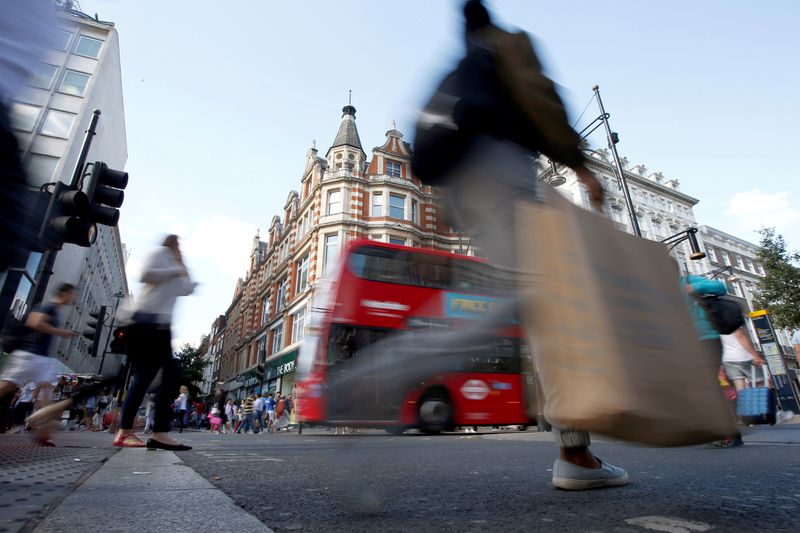 LONDON (Reuters) - British consumer morale struck a one-year high this month as the public became increasingly confident that an economic recovery from the COVID-19 pandemic is approaching and that they would benefit directly, a survey showed on Friday.

The monthly consumer confidence index from market research firm GfK rose to -16 from -23 in February. While still some way below the its long-run average of -9, the survey showed rising optimism in all of its components. Economists polled by Reuters had expected a smaller increase to -20.

The readings came a day after the Bank of England said Britain's economic recovery was gathering pace thanks to the speed of COVID-19 vaccinations. But its policymakers are split over the prospects for longer-term improvement, dampening speculation about a reversal of stimulus.

GfK said household expectations for the economic outlook and personal finances improved rapidly this month, with the latter hitting a three-year high.

"If this improved mood translates into spending, it might help reverse some of the economic damage the UK has suffered," GfK client strategy director Joe Staton said. "The eight-point fillip in our major purchase measure to -11 suggests this may well happen."

Staton added that further improvement was likely in the coming months.

Britain suffered its worst economic slump in three centuries last year when it shrank by 10%. It has also been hit with Europe's biggest COVID-19 death toll of over 125,000 people.

But the country is racing ahead with vaccinations and many economists expect the economy would shrink by 2% in the first quarter of 2021, half the hit forecast by the BoE only last month.