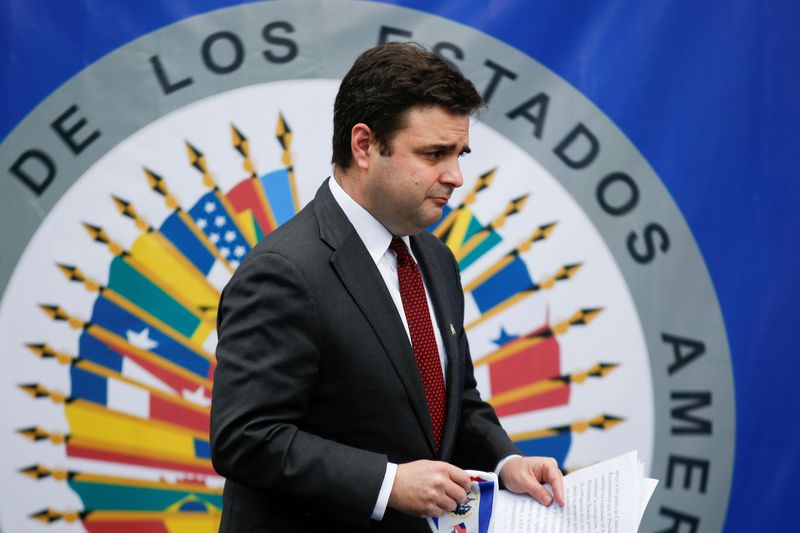 By Matt Spetalnick and Ted Hesson

WASHINGTON (Reuters) -The Biden administration is considering creating a task force of officials from the U.S. Justice and State Departments and other agencies to help local prosecutors fight corruption in Central America's Northern Triangle countries, a senior U.S. official said on Thursday.

Zuniga spoke just days before Vice President Kamala Harris, chosen by President Joe Biden to lead diplomatic efforts with Central America, is due to hold a virtual meeting on Monday with Guatemalan President Alejandro Giammattei to discuss solutions to the increase in migration to the U.S. border with Mexico.

U.S. officials see corruption as one of the root causes of the flow of migrants, along with poverty and gang violence, and want to make sure a $4 billion aid package being put together for the region does not fall prey to graft.

"It's important for the United States to show that we're on the side of those who are victims of corruption," Zuniga said.

With apprehensions at the U.S.-Mexican border at their highest level in two decades, Biden is ramping up efforts to ease a humanitarian crisis that has been one of his first major tests.

The task force under consideration would focus on corruption cases and helping prosecutors in those countries move forward, Zuniga said.

He said the United States was disappointed with the collapse of anti-corruption bodies in Guatemala and Honduras, which he called setbacks to efforts to fight "impunity."

The Biden administration seeks to revive some functions of these bodies, which lost U.S. support under former President Donald Trump. But reinstating anti-graft units would face staunch opposition from political and business elites.

Guatemala pioneered a United Nations-backed model with the International Commission against Impunity in Guatemala, a team of lawyers and investigators who worked with prosecutors. But its work provoked a backlash and it was pushed in 2019. In Honduras, a similar group was also shut down.

Issuing a warning, Zuniga said: "We have a mandate from the U.S. Congress to develop lists of officials who are involved in corruption and to propose actions against them."

He said actions could include revoking U.S. visas of people suspected of corruption and that the Justice and Treasury departments could also "designate" offenders. Such sanctions often entail freezing U.S. assets and forbidding Americans from conducting business with them.

Zuniga was apparently referring to a law sponsored by then-U.S. Rep. Eliot Engel and enacted by Congress in December that requires the State Department to assemble within 180 days a so-called "Engel List" of corrupt actors in the Northern Triangle. They would then be subject to bans on travel to United States and seizing of U.S. property.