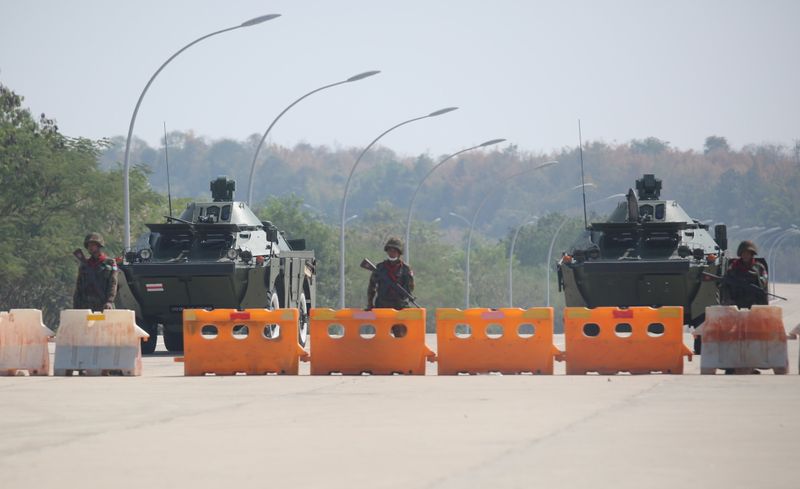 By Humeyra Pamuk and Simon Lewis

WASHINGTON (Reuters) - The U.S. State Department will conduct a review of its foreign assistance to Myanmar after determining that the military takeover in the Asian country this week constituted a coup, officials said on Tuesday.

Washington has not been in direct contact with the coup leaders in Myanmar or the deposed civilian government leaders.

At the request of the White House, the top U.S. military officer, Army General Mark Milley, attempted to call Myanmar's military following the coup, but he was unable to connect, a U.S. official said on Tuesday.

Under U.S. law, the assessment that a coup has taken place automatically puts restrictions on U.S. assistance.

The coup is a significant blow for the Biden administration and its effort to forge a robust Asia-Pacific policy to stand up to China. Many of Biden's Asia policy team are veterans of the Obama administration, which on leaving office in 2016 hailed its work to end decades of military rule in Myanmar as a major foreign policy achievement.

State Department spokesman Ned Price said the United States gave nearly $135 million in bilateral assistance to Myanmar in 2020 but only a "small sliver" of that went directly to the government.

Officials are reviewing that assistance, but have said humanitarian aid, including to the stateless Rohingya Muslim minority in Myanmar, and programs that promote democracy or benefit civil society would continue.

âOur first concern as we do that review will be to ensure that â¦ we donât do anything that would affect the long suffering people of Burma, including the Rohingya,â Price said in a briefing.

U.S. officials were also conducting a review of sanctions against Myanmar's military leaders and companies associated with them, he said.

State Department officials briefed staff from the House of Representatives and Senate foreign relations committees on Monday about the situation but did not preview new sanctions, according to aides who were on the call.

U.S. officials were trying to work with European and Asian allies who have contacts with Myanmar's military, but had not made much progress, lawmakers were told, according to an aide.

Senate Republican Leader Mitch McConnell, who has close ties to Suu Kyi, said in a statement he had spoken to Biden and Secretary of State Antony Blinken on Monday about the situation in Myanmar and urged the administration to "impose significant costs on the military for its attack on democracy."