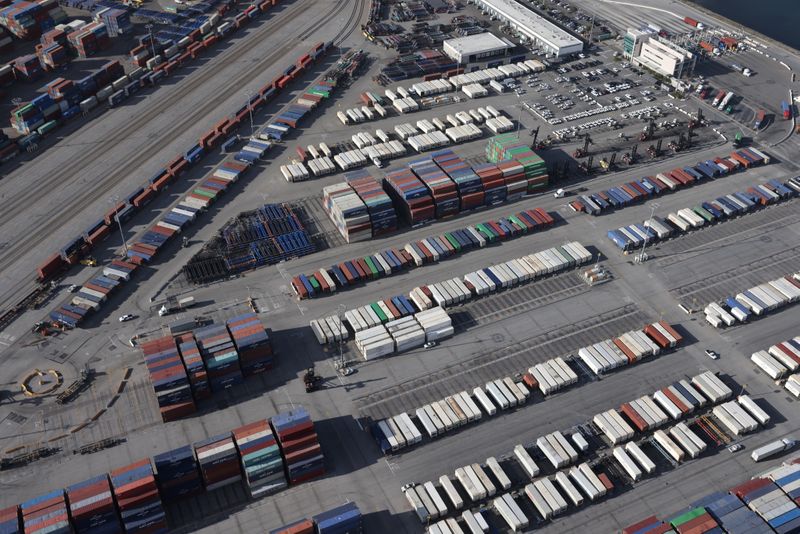 FILE PHOTO: Shipping containers sit on the dock at a container terminal at the Port of Long Beach-Port of Los Angeles complex, amid the coronavirus disease (COVID-19) pandemic, in Los Angeles, California, U.S., April 7, 2021. REUTERS/Lucy Nicholson

WASHINGTON (Reuters) - The U.S. current account deficit increased to a 14-year high in the first quarter as an acceleration in economic growth drew in imports, and the gap could remain wide, with the United States leading the global economic recovery from the COVID-19 pandemic.

The Commerce Department said on Wednesday the current account deficit, which measures the flow of goods, services and investments into and out of the country, rose 11.8% to $195.7 billion last quarter. That was the largest shortfall since the first quarter of 2007.

Data for the fourth quarter was revised to show a $175.1 billion gap, instead of $188.5 billion as previously reported. Economists polled by Reuters had forecast the current account gap widening to $206.8 billion in the January-March quarter.

Still, the deficit remains below a peak of 6.3% of GDP in the fourth quarter of 2005 as the United States is now a net exporter of crude oil and fuel.

The wider deficit is likely not an issue for the United States because of the dollar's status as the world's reserve currency. The economy grew at a 6.4% annualized rate in the first quarter. Growth this year is expected to top 7%. That would be the fastest growth since 1984 and would follow a 3.5% contraction last year, the worst performance in 74 years.

Imports of goods jumped $39.9 billion to a record $677.0 billion in the first quarter. Vaccinations against COVID-19 and trillions of dollars in pandemic relief are allowing for a greater reopening of the economy, unleashing pent-up demand, which is being partially satiated with imports.

Exports of goods rose $24.5 billion to $408.6 billion last quarter. The increases in both exports and imports reflected increases in nearly all major categories, led by industrial supplies and materials, primarily petroleum and products.

$211.4 billion, driven by gains in earnings and portfolio