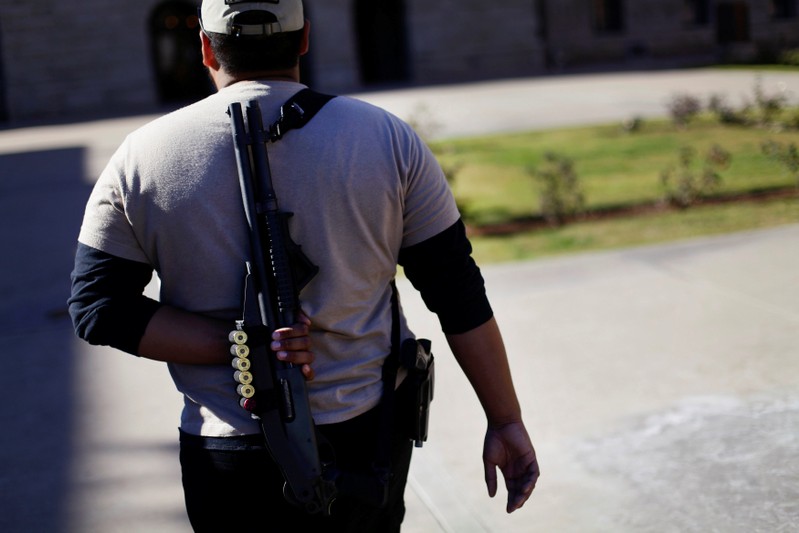 By Tom Hals and Jessica DiNapoli

(Reuters) - U.S. gunmaker Remington Outdoor Co has obtained commitments for nearly $300 million from its existing lenders, including some of the biggest U.S. banks, after new sources of funding dried up in the months leading up to its filing for Chapter 11 bankruptcy.

During that time, the company's investment bank, Lazard Ltd (NYSE: LAZ), approached more than 30 possible lenders, according to court documents.

"The vast majority of lenders contacted, however, indicated they were reluctant to provide financing to firearms manufacturers," said Lazard banker Ari Lefkovits in the papers.

Most of the banks providing the bankruptcy funding were lenders to Remington before its current financial problems, according to court records. Without the funds, Remington may have been forced to go out of business and the banks could have seen their investment crash in value.

The company and its investors have been under heightened scrutiny after 17 were killed in a school shooting in Parkland, Florida in February.

Remington filed for bankruptcy one day after hundreds of thousands of Americans took to the streets to demand tighter gun control measures.

Banks often sell troubled loans to hedge funds when a borrower is heading into bankruptcy, but one source told Reuters that even as the Remington loans were heavily discounted, buyers were scarce.

Remington disclosed the loan details in its Sunday bankruptcy filing, which the company said will allow it to cancel $775 million of debt and bring it out of Chapter 11 as soon as May.

BB&T declined to comment on its lending relationships. The bank said part of its consideration is to listen to its clients and stakeholders, who have a wide range of opinions.

âWeâre deeply concerned with the increasing amount of gun violence in our schools and communities,â the bank said.

The others, along with Remington, did not immediately respond to a request for comment.

The company ran into trouble after borrowing to ramp up production in 2016 in anticipation of greater industry demand, according to court filings.

The expectation of higher sales was in part driven by fears of a Hillary Clinton presidency and tighter gun controls. With the election of Donald Trump, who has said he strongly supports gun ownership, the firearms industry was stuck with a glut of weapons and higher levels of debt.

Remington, which said in January it was nearly out of cash, plans to tap the loans from the banks to help pay corporate expenses, including payroll, during its bankruptcy filing.

Remington's bondholders are also providing some of the bankruptcy loan and will receive a stake in the company when it exits bankruptcy.

Their identities were redacted in court documents.

The company also asked the court to seal the letters detailing the fees the lenders will earn from the loans, saying that the sums are commercially sensitive, according to filings in the bankruptcy court in Wilmington, Delaware.

The court records also showed that Remington's business faces new hurdles in the wake of the Florida shooting.

Walmart accounted for 11 percent of Remington sales in 2017, according to court documents.

Remington also said sales could be hurt by more government regulation, including enhanced background checks and a broader definition of "dealer" under current gun laws. Remington said if the 1994 federal assault weapons ban were re-enacted it would have an adverse effect on the business.

(Reporting by Tom Hals in Wilmington, Delaware and Jessica DiNapoli in New York)