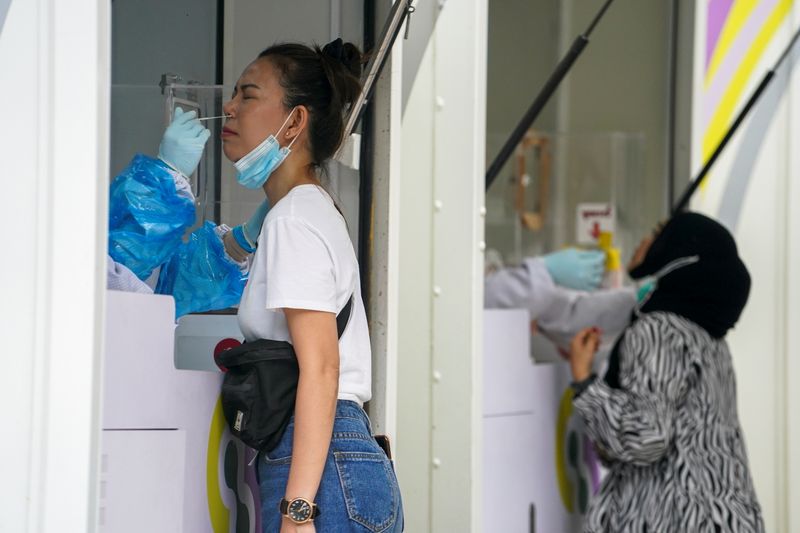 Healthcare workers take nasal swab samples from local residents for a COVID-19 test after hundreds of residents of Watthana district and the trendy Thonglor neighborhood tested positive for the coronavirus disease (COVID-19) in Bangkok, Thailand, April 8,

BANGKOK (Reuters) - A coronavirus outbreak in Thailand's capital may take more than two months to control, a health official said on Thursday, as authorities announced a broad ban on nightlife to tackle a new wave of infections and a highly contagious variant.

Authorities expect to arrest the outbreak in one or two months in the provinces, but it will likely take longer in Bangkok, the epicentre, said Kiatiphum Wongrajit, the ministry's permanent secretary.

"The main source of the infections is in Bangkok's entertainment venues, which could take longer to contain, depending on measures," Kiatiphum said in a statement.

The COVID-19 taskforce on Thursday said nightspots in Bangkok and 40 provinces, including pubs and karaoke bars, would be closed for two weeks. It did not specify when.

The taskforce also asked employers to let staff work from home and urged against non-essential travel.

Thailand reported 405 new COVID-19 infections on Thursday, in an outbreak that has reached 20 provinces and forced nearly a third of cabinet minister to self-isolate due to exposure to cases.

The spike in infections comes at a tricky time for Thailand, ahead of next week's annual Songkran festival, known for big gatherings and notoriously crowded water fights that authorities have banned.

Adding to concerns, Thailand on Wednesday confirmed the presence locally of the highly transmissible coronavirus variant B.1.1.7 first identified in Britain.

It has been found in more than 100 countries and has been blamed for fuelling new waves of infections in record numbers. (https://tmsnrt.rs/3dFjSo6)

The army was setting up a field hospital with 3,000 beds in 10 army bases, braced for a possible surge in new patients, a spokesman said.

Thailand plans to start its mass immunisation campaign in June, when a locally-manufactured AstraZeneca vaccine becomes available. It has so far immunised about 300,000 people, mostly health workers.

Thai experts are puzzled at how the UK variant evaded the country's strict quarantine system, which has helped keep overall cases to a relatively low 30,310 and deaths at just 95.

The taskforce said a reduction in the quarantine period introduced this month may be reconsidered.

Yong Poovorawan, a senior virologist, said the UK variant may have been brought to Thailand by land from Cambodia, where it is also present.