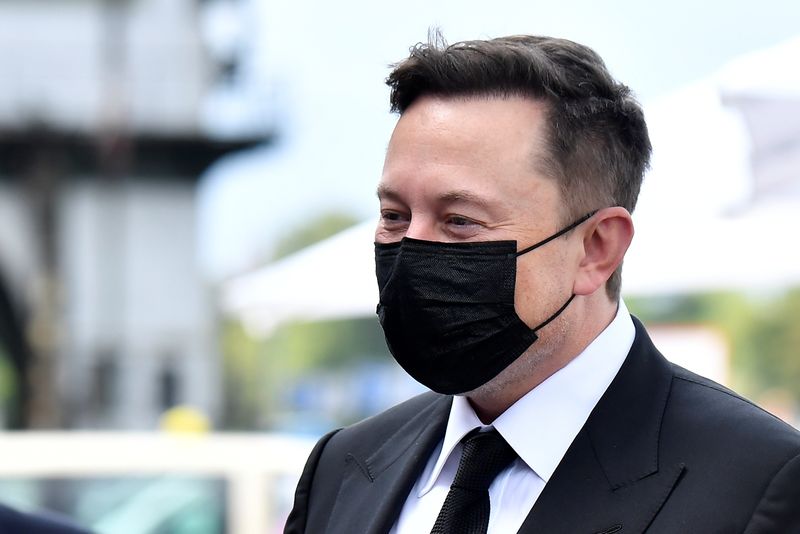 FILE PHOTO: Elon Musk wears a protective mask as he arrives to attend a meeting with the leadership of the conservative CDU/CSU parliamentary group, in Berlin, Germany September 2, 2020. Tobias Schwarz/Pool via REUTERS

By Akanksha Rana and Hyunjoo Jin

Analysts were expecting Musk to unveil at the event plans for Tesla to produce its own battery cell as it seeks to cement its lead over General Motors (NYSE: GM), Volkswagen

But in a post on Twitter ahead of the Tuesday event, Musk said: "This affects long-term production, especially Semi, Cybertruck & Roadster, but what we announce will not reach serious high-volume production until 2022."

LG Chem and CATL shares rose after the comments.

But Tesla shares fell more than 5% to $425.50 in extended trade as the tweets cast doubt on whether Tesla would be able to produce its own batteries any time soon - a concern echoed by experts and industry officials.

"Battery firms believe it is not easy to mass produce batteries. It took them a lot of time ... how can Tesla do it overnight?" a South Korean battery industry source told Reuters.

Tesla is working to produce new, bigger battery cells at its Fremont facility, two people familiar with the matter have told Reuters. The new cells will have a diameter of 42 mm, versus the 21 mm ones made at its joint battery factory with Panasonic that are used in Model 3 sedans, the people said.

Tesla may have to partner with Panasonic to mass-produce its own cells, Seoul-based battery expert Park Chul-wan said.

Some battery industry officials are wary that Tesla's move to produce batteries in-house could put pressure on prices.

"Tesla is sending signals to suppliers that they should further lower costs, and if not, Tesla would source more batteries in-house," a former LG Chem official said.

At the event, Tesla may also unveil its "million mile" batteries, which it is developing with CATL and are expected to have much longer life: the equivalent of 1 million miles or more, versus about 500,000 miles now.

(Reporting by Akanksha Rana and Sanjana Shivdas in Bengaluru and Hyunjoo Jin in SEOUL; Editing by Sayantani Ghosh and Himani Sarkar)