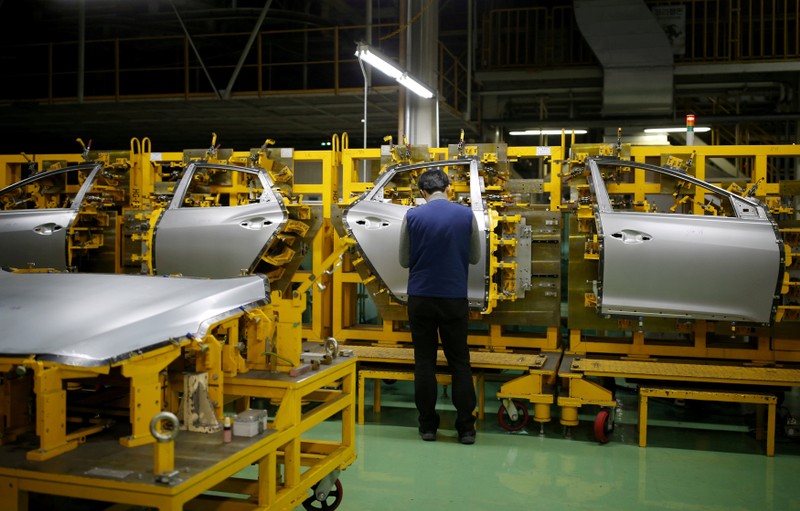 By Cynthia Kim and Joori Roh

SEOUL (Reuters) - Kim Hyun-ji voted for Moon Jae-in to be South Korea's president last year thinking things would improve with his promises to create jobs and address inequality. She now says that was a mistake.

"Since Moon came in, it has become so much more expensive to hire part-timers," said the 32 year-old owner of a clothing store in Itaewon, Seoul's prime party district.

"I've been single-handedly running the shop after my husband found another job last year, and it's been really rough. But knowing that wages would only go up, I'm not bothering to look for anyone," Kim said.

But his approval ratings since then have plunged by nearly 30 percentage points to the lowest since his election in May 2017. Many blame his controversial plans to sharply raise minimum wages and cut working hours for contributing to the worst job market since the 2008-2010 financial crisis.

With job losses hitting his main support base particularly hard, Moon may have little choice to roll back, or at least soft-pedal, some of his ambitious "income-led growth" policies that centered on higher minimum wages, officials, economists and political analysts say.

Failure to address the public uproar over jobs could also cost Moon political capital to pursue his other signature initiative - closer ties with North Korea - because a poorer public will be less supportive of using taxpayer money to fund cooperation with Pyongyang.

"The main determination that the public make about Moon is now less about North Korea, but more about whether he can create jobs and fatten people's pay," said Lee Sang-jae, an economist at Eugene Investment & Securities.

In a major setback for the self-styled "Jobs President," South Korea's July jobs report showed Asia's fourth largest economy added a mere 5,000 jobs from a year earlier, logging the worst performance since January 2010 when the economy was still reeling from the global financial crisis.

Moon's approval rating, which peaked at 83 percent in June after his April summit with North Korean leader Kim Jong Un, now stands at 56 percent, according to an opinion survey by polling firm Gallup Korea published on Friday.

In a Cabinet meeting on Monday, Moon told his economic team to "stake their positionsâ on solving the job issue, saying: "We need to fear losing the people's trust more than anything else."

At an urgently scheduled ruling party meeting to discuss the job situation on Sunday, Finance Minister Kim Dong-yeon said the government âwill consider improving or revising them if needed after reviewing the effects of the economic policies, in coordination with the ruling party.â

One finance ministry official, speaking on the condition of anonymity, said: "Perhaps the right thing to do is stick with the plan, but take it slower, rather than trying to see the results within his term."

SUPPORTERS HIT THE MOST

Last month, he conceded that was unlikely to happen now, amid signs companies and self-employed businesses like Kim's have slowed down hiring. What's more, the average disposable household income declined for a seventh straight quarter in annual terms in the April-June period.

Hardest hit are Moonâs core supporters led by workers aged in their 30s and 40s and lower-income households. Those in their 40s, where a whopping 87 percent identified themselves as Moon supporters in May, lost 147,000 jobs in July from a year ago, the biggest decline since 1998.

Some 33 percent of respondents to the Gallup Korea poll said Moon was doing a bad job, the highest-ever disapproval rating during his presidency.

Two-thirds of the disapprovers cited Moon's handling of the economy, including his 'inability to improve livelihood of ordinary citizens,' and 'minimum wage increases,' the poll showed.

âI used to be a frenzied supporter of Moon since day one, but after seeing about five of the cleaning ladies got fired in my company due to his careless decision to hike minimum wages, my view has changed," said 29-year-old Jeong Myung-jin, who works at a marketing firm in Seoul.

"He was elected after gaining huge support from the working class, but he is doing the polar opposite now."

The dismal jobs data comes at a time of growing doubts about North Korea's intentions on denuclearisation.

Washington and Pyongyang agreed to work toward complete denuclearisation of the Korean peninsula at their leaders' June summit in Singapore, but little progress has been made since.

"It would be critical for Moon to solve the jobs situation, in order not to lose people's blessing for his North Korea policy," said Shin Beom-chul, a senior fellow at the Asan Institute for Policy Studies in Seoul.

"Unlike in the past, young generations have little patience about their money being spent to aid cooperation with North Korea."