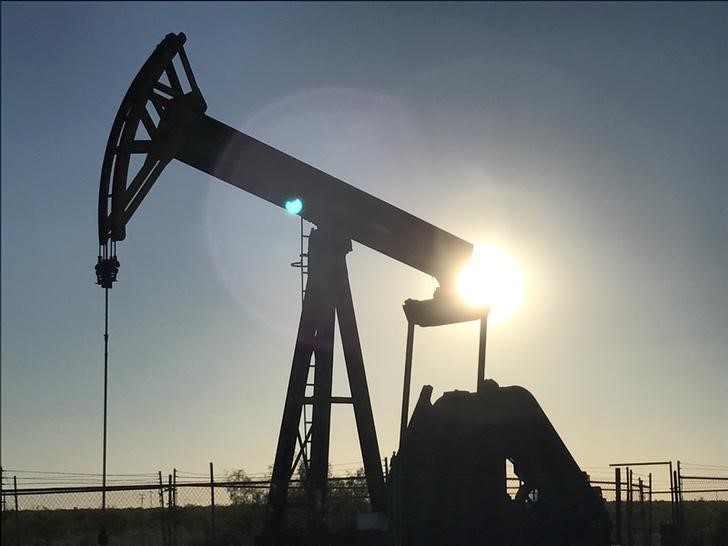 An oil pump is seen operating in the Permian Basin near Midland, Texas, U.S. on May 3, 2017. REUTERS/Ernest Scheyder

"We will not drill into oblivion," Tim Dove, chief executive of Pioneer Natural Resources Co (NYSE: PXD), told investors on Tuesday at a J.P. Morgan energy conference in New York.

Pioneer, one of the biggest operators in the Permian Basin, the largest U.S. oilfield, is confident that OPEC leader Saudi Arabia will not let oil prices remain near current levels for too long, Dove said.

Newer operating efficiencies allow Pioneer to continue to drill more, he said. But if prices were to remain depressed for a longer term, "we can pare away and still be a growth company even in a $45 (per barrel) environment."

For shale producers that set their 2017 capital budgets when oil was selling at $50 or more a barrel, the recent drop has threatened ambitions to generate enough cash flow to justify the higher capital spending. Many are still not earning enough to cover their higher 2017 budgets and oil's latest decline is causing angst among some investors.

WPX Energy Inc (NYSE: WPX), a growing Permian and Bakken shale producer, next year plans to add between one and three drilling rigs to its existing 10-rig plan for 2017. It could reduce that plan to between zero to three additional rigs if weak pricing holds, said Clay Gaspar, WPX's chief operating officer.

Occidental Petroleum Corp (NYSE: OXY), the largest acreage holder in the Permian, has no intention of scaling back on capital spending plans, said CEO Vicki Hollub. The company hopes to be cash flow neutral, that is, cover its capital budget and shareholder dividends from cash flow, at $50 a barrel for the year.

But Oxy's price scenarios show it still could achieve that goal at $40 a barrel average price for the year by cutting $1 billion from its capital spending.

"We do believe we need to be prepared for a $40 environment, but we recognize the fundamentals do not support that," Hollub said.

Doug Lawler, CEO of Chesapeake Energy Corp (NYSE: CHK), said the gas and oil producer is "continuously reviewing its capital plan" as it strives to become cash flow neutral. The company expects to increase end-of-year oil production by 10 percent over the end of 2016, he said.

However, it will not put recent financial strides at risk.

"We're not going to grow production at all cost," said Lawler. "The opportunity in 2018 to reduce our program, to reduce that spend, is something we're very focused on."

Anadarko Petroleum Corp (NYSE: APC) CEO Al Walker told another investor conference earlier this month that the oil industry has shown it can adjust to sharp price changes and could do it again.

"We can manage the $43" (per barrel price), Walker said. "We can take capital off the market, we can take production down, we can reduce our costs - because we did it the last time."