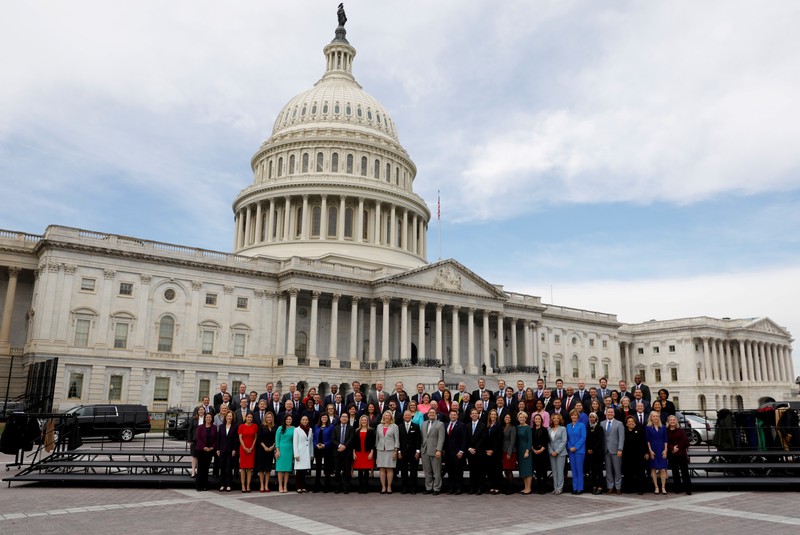 By Ginger Gibson and Mark Hosenball

WASHINGTON (Reuters) - After capturing the U.S. House of Representatives with a campaign that spoke of holding President Donald Trump accountable, some powerful House Democrats are now urging restraint and a focus on policy, at least at the outset.

An aggressive examination of the president is still needed, senior lawmakers and aides told Reuters. But Democratic leaders are trying to chart a measured path forward from early January when they will take over the House from Trump's Republicans.

That path will seek to avoid igniting political battles, for now, over matters such as Russian meddling in the 2016 U.S. presidential election, as well as possible collusion between Moscow and the Trump campaign and obstruction of justice.

Many Democrats want to probe these volatile topics, using subpoenas to get at documents and testimony they say Republicans have ignored for two years, lawmakers and aides said.

They also said they want to dig into Trump's property holdings, son-in-law Jared Kushner's businesses and daughter Ivanka Trump's use of private emails for official business.

But the investigative hard-chargers do not appear to be prevailing in shaping the Democrats' early 2019 agenda.

That is because other Democrats - including key committee leaders - want to focus on immigration, rising student loan debt, high-cost prescription drugs and the federal response to hurricane disasters, especially in Puerto Rico.

The Democrats' agenda will solidify in six to eight weeks. When it does, it will greatly shape the relationship for the next two years between Capitol Hill and Trump, who has not yet dealt with a chamber of Congress under opposition control.

Voters handed a House majority to Democrats in the Nov. 6 elections. With that comes more resources for investigations, but some members of key committees said they are concerned that rushing to wield that power could turn off voters.

Representative Jerrold Nadler, likely chairman of the House Judiciary Committee, is discouraging talk of an immediate push to impeach Trump. Other Democrats are doing the same.

At the House Intelligence Committee, members are debating whether to reopen the panel's 2016 Russian election-meddling probe, said sources who requested anonymity.

Representative Adam Schiff, on track to become the panel's chairman, is leading a faction that wants to hold off on reopening the Russian inquiry, said sources.

At the same time, Schiff is talking publicly about investigating Trump's ties to Russia, which has denied interfering in the 2016 election to favor Trump.

Democrat Joaquin Castro, an Intelligence Committee member, favors committees starting the 2019-2020 Congress with hearings on issues such as the separation of immigrant children from their parents. But he told Reuters that Republicans have "turned a blind eye to key leads in the investigation into Russiaâs interference in our 2016 election ...

"In the next Congress, we will be sure to revisit all those leads, while at the same time actively examining whether Russians were money laundering through the Trump Organization, gaining any leverage over the president."

Republicans have already begun criticizing Democrats, even before their first investigation is launched, embracing the term "presidential harassment" that Trump likes to use.

At the same time, Republicans reopened 2016's wounds on Friday when the House Judiciary Committee said Republican Bob Goodlatte, with only weeks to go as committee chairman, issued subpoenas for former FBI Director James Comey and former Attorney General Loretta Lynch to give depositions in a probe of their handling of an inquiry into Hillary Clintonâs emails.

A committee statement said Comey would be deposed on Dec. 3 and Lynch on Dec. 4 about the long-festering email issue involving Clinton, the Democrat defeated by Trump in 2016.

Before the current lame-duck Congress ends in mid-December, House Democrats will choose a party leader for 2019-2020, with their current leader Nancy Pelosi the front-runner.

The leader and committee chairs have a "vision" for the investigative agenda, but details are still being discussed, a senior aide said.

The wide-ranging House Oversight Committee is likely to be chaired by Representative Elijah Cummings. He has called an examination of high prescription drug costs a top priority.

Still, Cummings told Reuters the panel has asked for information on the reported use by Ivanka Trump, who serves as a senior aide to her father, of personal email to contact other administration officials, a possible records preservation law violation.

The White House has ignored the request, Cummings said. "We need those documents to ensure that Ivanka Trump, Jared Kushner, and other officials are complying with federal records laws," he said.

Democratic committee member Carolyn Maloney said she was pushing Cummings to probe the administration's decision to add a question about citizenship to the U.S. Census.

Matt Cartwright, another Oversight Democrat, said, "I'm against weaponizing the committee, however, I don't want to defang the committee by the same token ... Our committee should be more than a political loudspeaker."