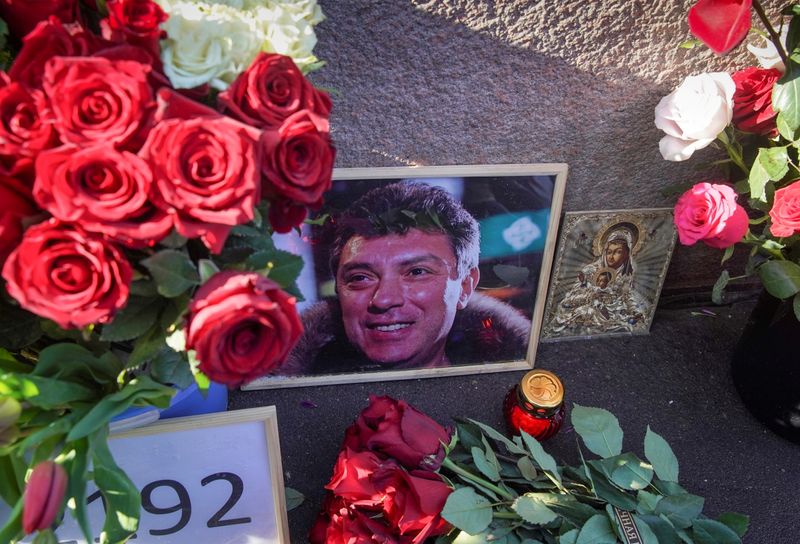 FILE PHOTO: Flowers and a candle are placed next to a portrait of Russian opposition politician Boris Nemtsov at the site of assassination on the 6th anniversary of his death, in central Moscow, Russia February 27, 2021. REUTERS/Tatyana Makeyeva

MOSCOW (Reuters) - Russian nationalists ransacked a makeshift memorial to slain Kremlin critic Boris Nemtsov in central Moscow early on Monday to protest against the start of a visit by a senior U.S. official, an act of vandalism condemned by opposition activists.

Nemtsov, a critic of President Vladimir Putin, was shot dead on Feb. 27, 2015, as he walked across a bridge near the Kremlin. A group of Chechen men were convicted of carrying out the murder, but the identity of the person who ordered the hit has not been revealed.

Opposition activists began guarding a makeshift memorial on the bridge when municipal authorities turned down a request to put up a plaque there in his honour. It has become a gathering place for opposition activists who regularly lay flowers, light candles or visit the memorial to pay tribute.

Some Western diplomats and officials also visit the memorial on the anniversary of Nemtsov's death or when in Moscow for talks with Russian officials.

In a post on Russian social media network VK, the SERB radical nationalist group said its members had destroyed the memorial to coincide with the arrival of U.S. Under Secretary of State Victoria Nuland, who landed in Moscow on Wednesday for an official visit.

Nuland, who is regarded by Kremlin hawks as someone who has stirred up anti-Russian sentiment trouble in Moscow's backyard, will hold talks at a time when political ties between the U.S. and Russia are badly strained.

"To mark the arrival in Russia of the American Victoria Nuland, the main specialist in colour revolutions, SERB has carefully taken everything from the illegal necropolis named after a traitor of our national interests. Everything is clean near the Kremlin," SERB said in its statement.

Tamara Lugovykh, one of the activists who takes turns to guard the Nemtsov memorial, said it was the fifth time it had been ransacked in a 10-day period.

"They (SERB) attacked the Boris Nemtsov memorial and destroyed it completely, having stolen flowers, portraits, lanterns, icons and an expensive cross, as well as the volunteers' belongings," Lugovykh told Reuters in an email.

The Moscow police did not immediately respond to a request for comment.

SERB has vandalised the memorial on numerous occasions and orchestrated attacks on opposition figures.