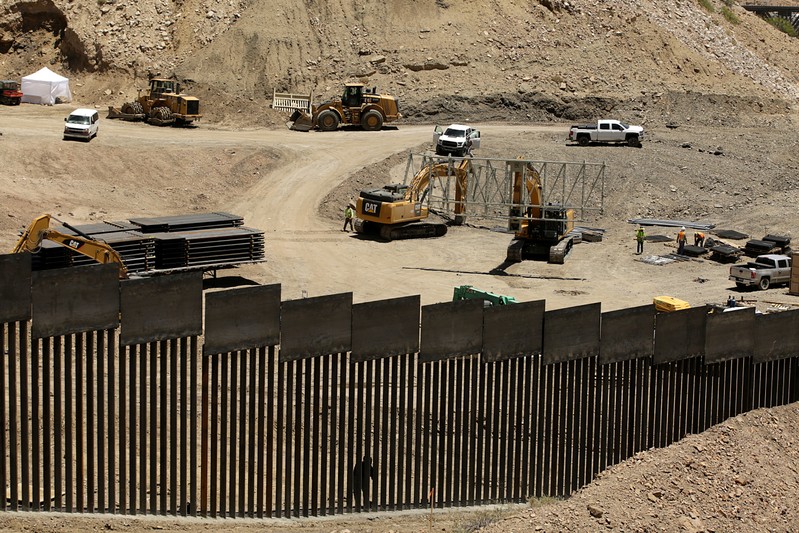 Heavy machinery is seen stationary next to a bollard-type wall built along the border of a private property, using funds raised from a GoFundMe account, at Sunland Park, New Mexico, as seen from Ciudad Juarez, Mexico May 29, 2019. REUTERS/Jose Luis Gonzal

TAOS, N.M. (Reuters) - A New Mexico mayor on Thursday said he and his staff received multiple death threats after they briefly halted construction of a crowd-funded, private border wall by a group that then urged supporters to tell the city to "stop playing games," and alleged it was tied to drug cartels.

Sunland Park Mayor Javier Perea said his email and voicemail were clogged with thousands of messages, some calling him racist slurs and others threatening to "come down and shoot us all."

Construction was resumed within 36 hours, however, after the city rushed through necessary approvals for the group We Build the Wall, which expects to complete the project within days.

The Florida-based group has raised $23 million via crowd-funding site GoFundMe.com to build private border walls to halt smuggling and a surge in undocumented migrants, after funding for President Donald Trump's promised wall was blocked.

Perea described the tactics of We Build the Wall as a "cheap blow," and the American Civil Liberties Union accused it of pursuing a "white Nationalist" agenda.

"If you want to continue working in a nation of laws, try your best to adhere to those laws," the Sunland Park mayor said of the group during a press conference on Thursday.

Brian Kolfage, founder of We Build the Wall, told reporters he had to use "extreme measures" to push through the $6 million to $8 million project.

Kolfage, a triple-amputee veteran of the U.S. Air Force, on Tuesday described Sunland Park as "corrupt," and said its links with neighboring Mexico were a sign of cartel control.

"What cartel paid off the Sunland Park City officials to lie and shut down our wall project?!" Kolfage tweeted.

The group's co-founder Dustin Stockton also urged its 274,000 donors to call Sunland Park and "tell them to stop playing games."

The ACLU of New Mexico described the wall as a "monument to hate and paranoia."

"To suggest that the city, primarily composed of Hispanic families, endorses violence and crime is not only racist, but also does a deep disservice to the fine families that make up the community of Sunland Park,â Executive Director Peter Simonson said in a statement.