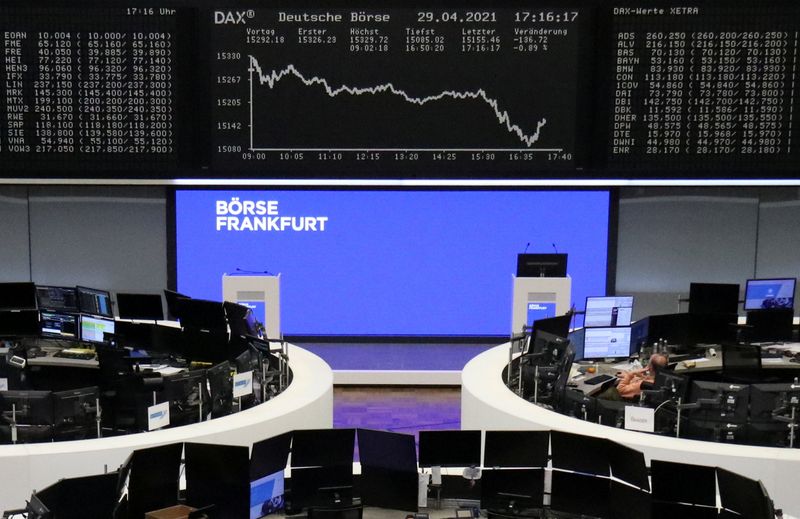 By Anisha Sircar and Ambar Warrick

A mixed batch of earnings also weighed, with Deutsche Bank down 6.9% despite posting a better-than-expected quarterly profit, as investors questioned the bank's reliance on volatile money spinners.

French payments firm Worldline dropped 15.9% to the bottom of the STOXX 600 on disappointing results and guidance.

Traders are now focused on the European Central Bank (ECB) meeting on Thursday, where policymakers are expected to keep interest rate unchanged and push back on market inflation forecasts.

"After such strong highs we have seen on indices, I'm not surprised that we see a kind of breather today ahead of the ECB meeting," said Roland Kaloyan, head of European equity strategy at SocGen.

"The ECB will remain accommodative, but again, you always have the risk that any message or any word could be misunderstood or misinterpreted by the market."

Soaring inflation expectations are likely to put pressure on the central bank as it considers how much support to provide the euro zone economy once its pandemic bond-buying expires next March.

Despite the uncertainty, the STOXX 600 is on track to gain more than 4% in October, as stronger-than-expected quarterly results countered concerns about inflation and a global energy crunch.

Among the day's gainers, French household equipment maker SEB jumped 12.4% to the top of the STOXX 600 after posting better-than-expected third quarter results.

Germany's Puma added 3.6% after hiking its 2021 sales outlook even as it cautioned that a lockdown in Vietnam, port congestion and container shortages were hurting its supply chain.