Marketmind: "Old friends" get together 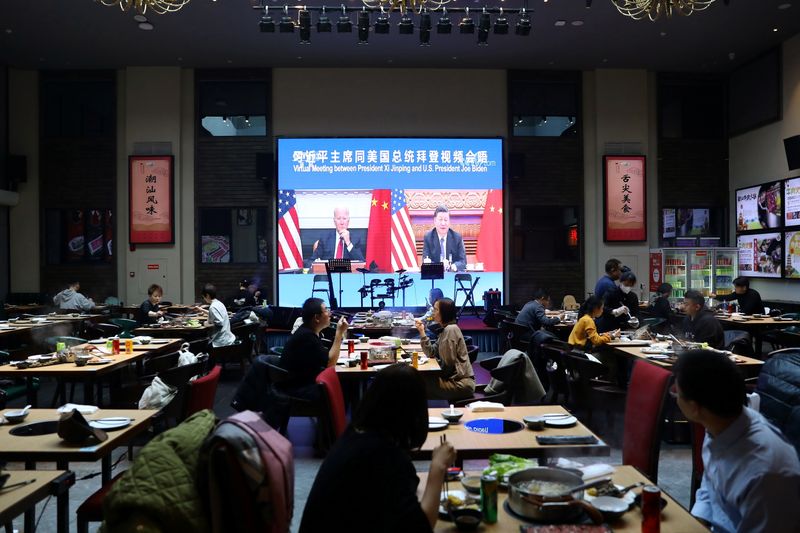 A look at the day ahead from Sujata Rao.

A Joe Biden-Xi Jinping summit -- in which the Chinese leader called the U.S. president his "old friend" -- has put markets in a good mood.

Whether that lasts however, could depend on U.S. October retail sales figures due out later this session.

Given that personal consumption comprises almost 70% of U.S. GDP, it matters hugely whether Americans choose to spend or save. Plus, U.S. shoppers are also a key driver of the pressures besetting global supply chains.

And while the forecast is for a 1.1% rise, the risk is that inflation -- at the highest since 1990 -- will have started to dent spending. Remember, data last Friday showed consumer sentiment at a decade-low.

A clutch of Q3 earnings from retailers such as Walmart and Home Depot will add to the picture. So far, equity investors don't seem perturbed, having lifted Wall Street's retail shares index more than 10% in the past month, allowing it to outperform the broader S&P 500.

Britain meanwhile has released robust jobs figures showing the end of furlough schemes had not lifted unemployment. With a Bank of England interest rate rise now all but certain for December, sterling is inching higher .

A buoyant Asian session following the Biden-Xi summit leaves European and U.S. equities tipped to open firmer. The Chinese yuan has risen to a five-month high against the dollar.

And bond yields have inched lower, though at 1.6%, 10-year Treasury yields are still up almost 20 basis points since before last Wednesday's inflation data.

Finally, watch shares in EV maker Tesla>. They have lost more than $200 billion in market cap as its CEO Elon Musk continued to offload holdings.

Key developments that should provide more direction to markets on Tuesday: