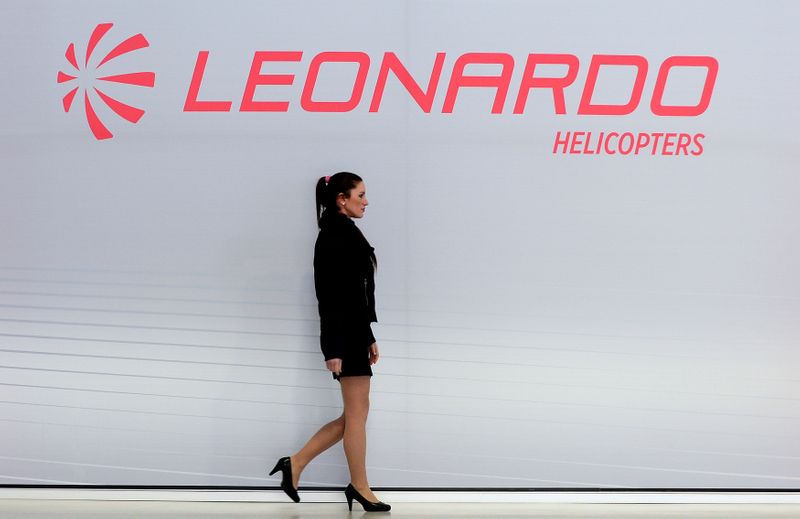 FILE PHOTO: A hostess walks past a Leonardo's helicopter logo at the headquarters in Vergiate, near Milan, Italy, January 30, 2018. REUTERS/Massimo Pinca/File Photo

MILAN (Reuters) - Italian aerospace and defence group Leonardo is confident it will meet guidance this year on earnings, debt and cash flow despite bigger losses at its Aerostructures division, senior managers said on Wednesday.

Aerostructures, which produces parts for civil airplanes, will continue to have lower orders from Boeing, which means the business will face bigger losses this year than in 2020.

The group will take action to cut around 1,000 jobs in the division as part of a restructuring, the management said, which prompted a reaction from trade unions, which asked for government support to safeguard Leonardo's four production sites in southern Italy, which employ around 5,500 people in total.

The Aerostructures business is expected to absorb 350-400 million euros of cash in 2021, but executives said the group would meet a full-year target for free operating cash flow of 100 million euros, up from 40 million euros last year, thanks to improvements in its helicopters and aircraft businesses.

Alessandro Profumo, CEO of state-controlled Leonardo, said the company was open to considering acquisition opportunities as well as the sale of non-core businesses to boost growth while cutting debt.

He said on a conference call that the proceeds from a planned listing of its DRS business and any effects from potential M&A deals were not included in 2021 guidance.

The CEO's comments helped to boost Leonardo's shares to their highest level since early March 2020.

"We continue to work to reach investment grade rating, but if an M&A opportunity arises we will look at it," Profumo said.

Among the businesses that could be put on the block, the CEO pointed to the group's automation business line, while he said defence electronic business would be an interesting area for growth, even through potential M&A.

The future of the automation business envisages a tie-up with a partner in the coming months, trade union FIOM CGIL said in a statement on Wednesday after meeting with Leonardo representatives.

"The (400) workers of the unit must remain in Leonardo," FIOM CGIL Representative for Aerospace Sector Claudio Gonzato said in a statement.

General Manager Lucio Valerio Cioffi said the aim of reaching break-even in the Aerostructures business this year was not achievable and that a detailed restructuring plan would be presented later this year.