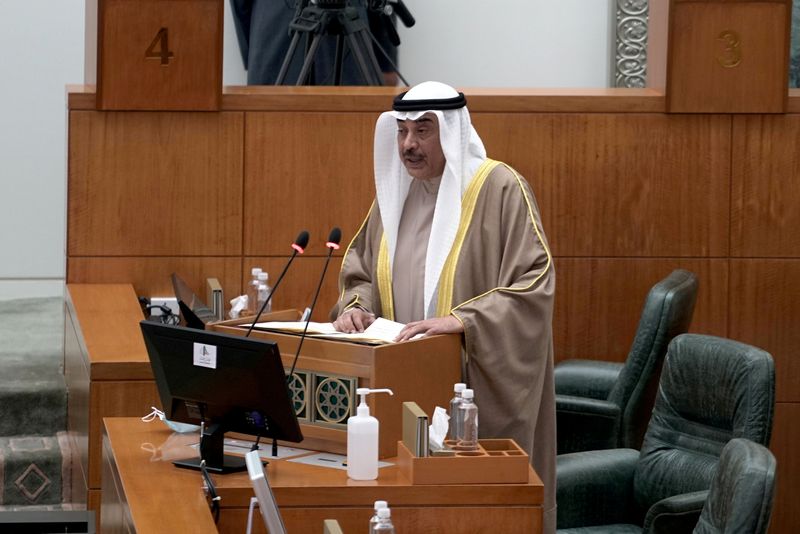 KUWAIT (Reuters) - Kuwait's government and opposition lawmakers are expected to start talks this week called for by the ruling emir in a bid to end a standoff that has hindered efforts to boost state finances and enact economic and fiscal reform.

Hit hard by lower oil prices and the COVID-19 pandemic last year, the wealthy OPEC producer faces liquidity risks largely because the elected parliament, which returns from summer break on Oct. 26, has not authorised government borrowing.

Opposition lawmakers have said their priority in the talks, which one source said could start on Tuesday, was an amnesty bill to pardon dissidents, including former MPs who stormed parliament in 2011 and are now in self-exile abroad.

Analysts said Emir Sheikh Nawaf al-Ahmed al-Sabah's call last week for a "national dialogue" could ease paralysis in parliamentary work as several MPs insist on questioning the prime minister on several issues including the handling of the coronavirus pandemic and corruption.

"We ask that they commit to the two most important issues... issuing the amnesty and withdrawing the prime minister's request for immunity before the end of the dialogue and the resumption (of parliament) sessions," lawmaker Mohammed Barrak Al-Mutair, a member of the opposition '31 bloc', tweeted on Sunday.

Several lawmakers have questioned the constitutionality of a motion passed in March delaying any questioning of premier Sheikh Sabah al-Khalid al-Sabah until the end of 2022.

Kuwait, which bans political parties, is the only Gulf monarchy to give substantial powers to an elected parliament, which can block laws and question ministers from the appointed government, although the emir has final say over state matters.

Frequent rows and deadlocks between the cabinet and assembly have over decades led to successive government reshuffles and dissolutions of parliament, hampering investment and economic reform in the country, which saw its budget deficit hit a record $35.5 billion in the 2020/21 fiscal year.

"Any dissolution of the National Assembly ... will lead to a similar crisis with a new parliament due to the general popular mood," said Kuwaiti political analyst Muhammed Al-Dosari, referring to a likely strong opposition showing in any new polls.

Other issues that could be raised, Dosari said, are the electoral law and legislation on freedom of expression in the Gulf state, where criticising the emir is a crime.