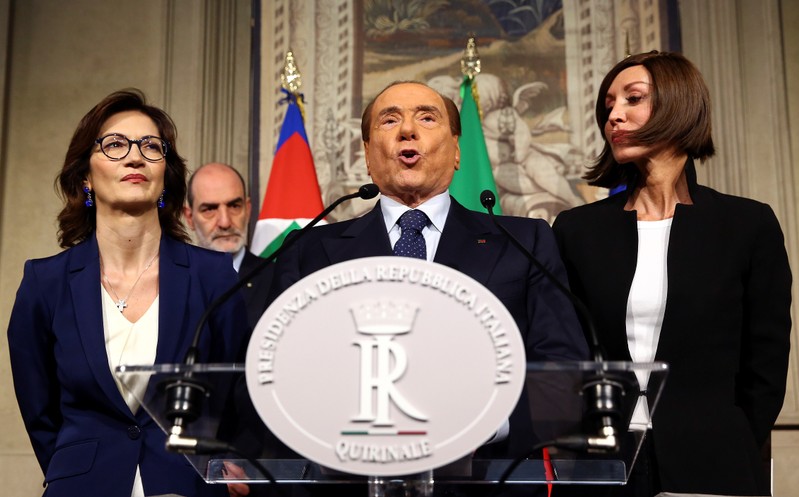 Forza Italia party leader Silvio Berlusconi speaks to the media during the second day of consultations with the Italian President Sergio Mattarella at the Quirinal Palace in Rome, Italy, April 5, 2018. REUTERS/Alessandro Bianchi

By Crispian Balmer and Gavin Jones

ROME (Reuters) - Talks to try to break the stalemate following Italy's inconclusive election have failed to make progress, the president said on Thursday, calling for parties to be responsible in fresh consultations next week.

In two days of meetings with head of state Sergio Mattarella, political leaders did not appear to shift from their previous positions, with a mesh of apparently irreconcilable demands blocking the formation of a government.

"According to the rules of our democracy, it is necessary that there be some accords between different political forces to form a coalition," Mattarella told reporters at the presidential palace. "This condition has not yet emerged."

The March 4 vote produced deadlock, with a conservative bloc including the far-right League and Silvio Berlusconi's Forza Italia (Go Italy!) emerging as the largest group, while the anti-system 5-Star Movement was the biggest single party.

The center-left Democratic Party (PD), which has governed for the past five years, trailed home in third place, punished by voters for the sluggish economy, growing poverty and a huge jump in migrant arrivals from lawless Libya.

Mattarella said a pause for reflection would be useful to let parties "evaluate responsibly the situation". A source in his office said the new talks would not begin before Wednesday.

5-Star leader Luigi Di Maio reiterated a previous call for a German-style governing contract with either the League or the PD and said he wanted to meet their leaders to discuss policy.

This proposal has so far been rejected by both parties. The PD says it wants to go into opposition, while League leader Matteo Salvini has refused to break with his coalition ally Berlusconi, which is a condition posed by Di Maio.

Financial markets have so far taken the stalemate in their stride, but investors fear a possible tie-up between the League and 5-Star, which are both hostile to EU budget restrictions and demand that Italy be much more assertive in Brussels.

Salvini said he wanted to form a stable government with his center-right allies, but acknowledged for that to happen they would need to hook up with the 5-Star.

However, Berlusconi made clear he wanted nothing to do with 5-Star, in response to its own rejection of him.

"We are not open to government solutions in which envy and social hate, poverty politics and judicial witch hunts are the cornerstone," Berlusconi said, using the same terms as when he denounced 5-Star during the election campaign.

5-Star, which bases its appeal on a vow to clean up politics, points to Berlusconi's 2013 conviction for tax fraud and brands the billionaire businessman a political failure tainted by years of graft scandals.

Di Maio said the fact the center-right leaders had different positions on governing with 5-Star, and had met with Mattarella separately rather than as a bloc, showed they were already divided and not a genuine alliance.

The battered PD could act as a kingmaker, having the numbers in parliament to bring to life either a center-right or a 5-Star government. But its leadership ruled out any such role and Salvini has also dismissed such a tie up.

"The negative election result does not allow us to formulate government solutions that include us," the PD's acting secretary Maurizio Martina said after his meeting with the president. ($1 = 0.8151 euros)