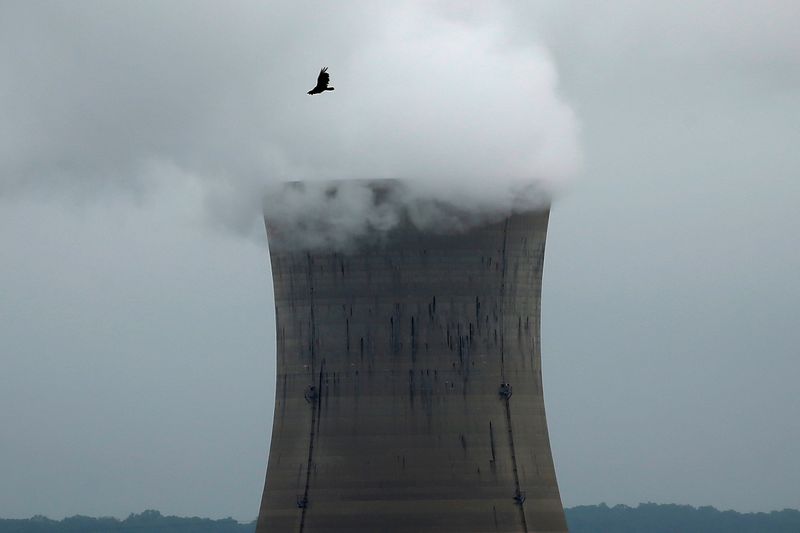 (Reuters) -The Illinois House late on Thursday passed an energy bill with nearly $700 million in incentives for two Exelon Corp nuclear power plants, taking the legislature one step closer to saving the plants the company has threatened to close starting on Monday.

"What the House has accomplished tonight is monumental and life changing for the future generations of Illinois," said House Speaker Emanuel "Chris" Welch, a Democrat. "Illinois is on the path to a greener future that prioritizes a reduction in carbon emissions, saves jobs, diversifies the energy sector and tackles necessary ethics reform."

While nuclear power plants create toxic waste for which there is still no permanent repository in the United States, they are also praised by some environmentalists and politicians because they generate large amounts of power virtually emissions-free. They also tend to provide some of the energy industry's highest paying jobs.

Senate President Don Harmon, a Democrat, said the Senate is scheduled to return on Monday to "advance this vital proposal to the governor's desk so it can become law."

The United States has 93 nuclear reactors, more than any other country, but that's down from 104 in 2012 as aging plants struggle to compete with power generated by solar and wind farms and plants that burn natural gas.

Gina McCarthy, President Joe Biden's climate adviser, has said maintaining some of the existing nuclear plants is "absolutely essential" to hit U.S. goals to decarbonize the electric grid by 2035 and the administration has supported federal incentives for the nuclear industry.

As the Illinois bill languished for more than two years, Exelon had said it would close its Byron nuclear plant on Sept. 13 and Dresden in November if a state or federal program did not come to the rescue.

The bill had been held up on disagreements between labor and environmental groups on when to close coal and natural gas plants.

Exelon did not immediately respond to a request for comment on the House vote.

An amendment that emerged this week helped seal the passage in the House. Under the measure, coal plants including Prairie State, the state's largest carbon emitter, are required to cut current emissions 45% by 2035 and to be 100% carbon free, or close, by Dec. 31, 2045. The plants can use any technology, including the burning of hydrogen produced by renewable power, to meet those levels.

The bill contains nearly $700 million in carbon mitigation credits over five years for three Exelon nuclear plants, including the Braidwood facility, which the company has said is at risk but has not scheduled a date to close.

"I look forward to (the bill's) swift passage in the Senate, and signing it into law as soon as possible, because our planet and the people of Illinois ought not wait any longer," said Illinois Governor J.B. Pritzker, a Democrat.