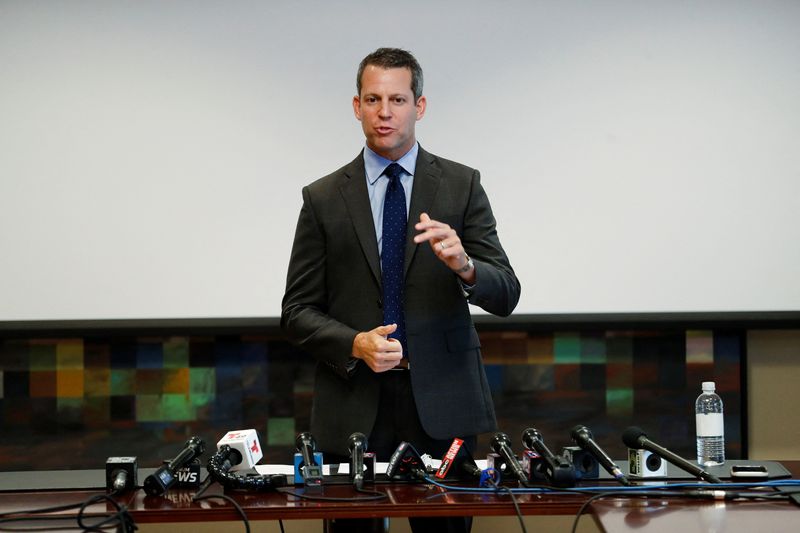 (Reuters) - A Florida state attorney on Wednesday sued Governor Ron DeSantis after he was suspended earlier this month for saying he would not prosecute anyone who sought or provided abortions.

In a lawsuit filed in Tallahassee, Florida, federal court, prosecutor Andrew Warren said his suspension by DeSantis violated his First Amendment rights as well as Florida's constitution and demanded to be reinstated.

DeSantis' office did not immediately respond to a request for comment.

"Today we took action against Ron DeSantis' abuse of power and unlawful suspension," Warren wrote in a Twitter post. His lawyer Jean-Jacques Cabou of the Perkins Coie law firm did not immediately respond to a request for comment.

Warren is the top prosecutor in Florida's 13th Judicial Circuit in Tampa, an elected position.

He was among a group of prosecutors who have pledged not to use their offices to criminalize reproductive health decisions following the U.S. Supreme Court's ruling in June that overturned the constitutional right to abortion.

In suspending the state attorney, DeSantis said Warren cannot "pick and choose which laws to enforce based on his personal agenda." The governor has been courting conservatives as part of an potential presidential bid in 2024.

Warren argued in the lawsuit that he was suspended in retaliation for exercising his First Amendment rights. Under the Florida Constitution, state attorneys can pick and choose which cases they pursue, the lawsuit said.

A handful of lawsuits have been filed challenging Florida's 15-week ban, including one by a group of abortion providers and others filed by clergy members of five religions.

(Reporting by David Thomas in Chicago; Editing by Rebekah Mintzer and Matthew Lewis)