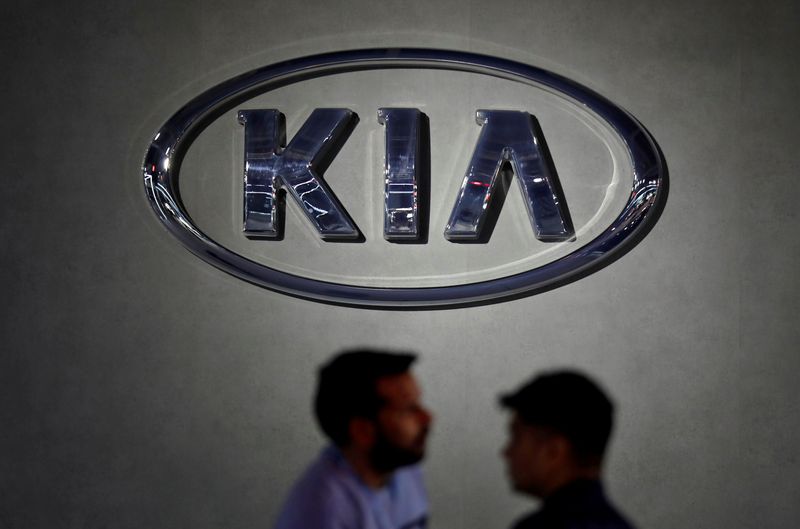 FILE PHOTO: Visitors walk past the logo of Kia Motors at its pavilion at the India Auto Expo 2020 in Greater Noida, India, February 5, 2020. REUTERS/Anushree Fadnavis

The study found most domestic brands, including Fiat Chrysler's Dodge, Ram and Jeep as well as GM's Chevrolet, Buick and Cadillac, ranked above average.

GM's Chevrolet Sonic achieved the best score for individual model in the study.

"Collectively, this is the best-ever performance by the Detroit automakers â when compared with the import brands â in the history of the study," J.D. Power said.

The consultant added that most premium brands ranked below average, as they generally equip their vehicles with complex technology, which can cause problems for some owners.

One-fourth of all problems cited by new vehicle owners related to infotainment, including complaints about built-in voice recognition and touchscreens.

Tesla Inc (NASDAQ: TSLA) made its debut on the list with a score that suggested 250 problems per 100 vehicles. However, the electric car maker was not ranked as it did not meet the required criteria for a comparative study.

"Unlike other manufacturers, Tesla doesn't grant us permission to survey its owners in 15 states where it is required," said Doug Betts, president of the automotive division at J.D. Power.

The study found that GM's plant in China, which makes the Buick Envision, was building vehicles with the fewest defects or malfunctions.

(Reporting by Sanjana Shivdas and Neha Malara in Bengaluru; Editing by Vinay Dwivedi)