Factbox: What Biden is doing to bring more refugees into the U.S. 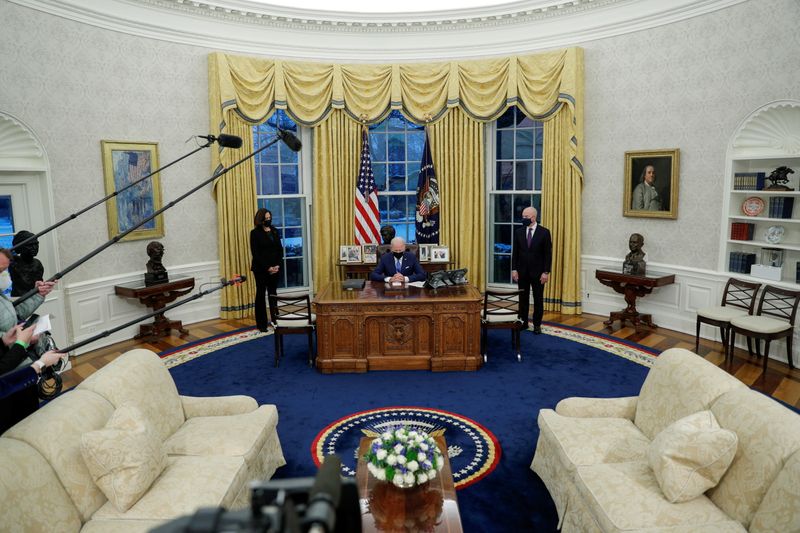 WASHINGTON (Reuters) - U.S. President Joe Biden is proposing to raise refugee admissions this year to 62,500 from the record-low 15,000 set by his predecessor Donald Trump.

U.S. State Department officials are expected to meet this week with key lawmakers in a formal consultation that is part of the process to set refugee levels, according to three people briefed on the meetings.

Here is Biden's plan, based on a proposal submitted to Congress and people familiar with it.

In Biden's proposal to Congress, he argues the expansion this year is needed in part to resettle refugees from more than a dozen nations whose humanitarian situation is worsening. The president's stance contrasts sharply with Trump's depiction of refugees as a security threat and economic burden.

Current refugee admissions slowed to a crawl amid Trump's restrictions and the coronavirus pandemic.

From Oct. 1 to Feb. 5, the United States resettled only 1,501 refugees, according to State Department data shared with refugee groups.

Biden's plan specifically mentions the plight of refugees from more than a dozen countries, including Syria, where it says "regime forces have forcibly displaced, raped, starved, and massacred civilians."

Other refugee populations mentioned in Biden's proposal are those in the Democratic Republic of Congo, Rohingya Muslims from Myanmar, Uighurâ¯ Muslims from China and residents of Hong Kong. In the Western Hemisphere, the plan cites refugees from Venezuela, Guatemala, El Salvador, Honduras and Nicaragua, among other nations.

More broadly, Biden's proposal says that increased admissions could provide safety to refugees facing an increased threat of gender-based violence due to confinement and economic struggles during the coronavirus pandemic.

Biden intends to launch a pilot refugee program that would allow private sponsors to fund costs associated with resettlement in the United States, according to his proposal to Congress.

The pilot program will focus on refugees reuniting with relatives in the United States and would not be limited by nationality, the proposal said.

Some refugee advocates see the effort as a step toward a broader economic sponsorship program that could also include businesses, universities and charity groups.

REFUGEES FROM IRAQ AND AFGHANISTAN

Biden issued an executive order on Feb. 4 that aims to speed up refugee processing and remove barriers that blocked some applicants.

The order called for a review of the Special Immigrant Visa program for refugees who aided U.S. interests in Iraq and Afghanistan to determine whether there have been "undue delays" for applicants.

The Trump administration carved out 4,000 spots for Iraqi refugees in its 2020 cap for admissions but only 537 were resettled in the fiscal year, which ended on Sept. 30, 2020.

Biden's order highlighted the role of climate change in the displacement of people around the world, calling on heads of several U.S. agencies to produce a report on the matter by early August.

The rollback of that Trump policy will be partly symbolic since a Maryland-based federal judge blocked it nationwide more than a year ago, a decision that was upheld in January by the 4th U.S. Circuit Court of Appeals.

Biden also rescinded a Trump order that called for "enhanced vetting" of refugees and specifically targeted 11 countries. Ten of the 11 affected countries were in the Middle East and Africa.

(Reporting by Ted Hesson in Washington, editing by Ross Colvin and Mark Heinrich)