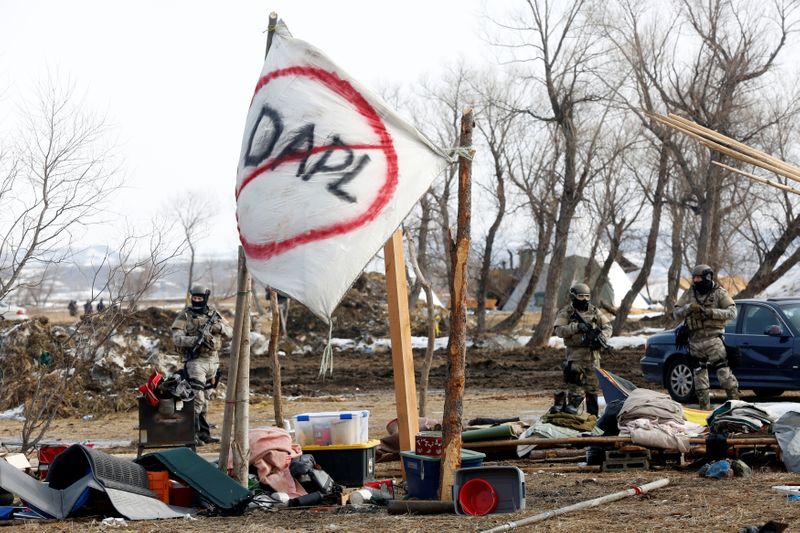 NEW YORK (Reuters) - The operators of the Dakota Access oil pipeline (DAPL) argued to a federal court on Monday that the system's shutdown would be even more harmful than previously anticipated, in their final plea to keep the line open after a key permit was scrapped.

The operators, led by Energy Transfer, told the U.S. District Court of the District of Columbia that an "immediate economic shock" would occur if the line were shut during a court-ordered environmental review. The company's revenue losses while closed would be 10% higher than previously projected, at between $3.44 million and $4.28 million per day, they said.

The 570,000 barrel-per-day (bpd) DAPL pipeline began operating in 2017 but has been locked in legal battles with Native American tribes and activists since before the line started construction.

Last year, the D.C. Court canceled a permit allowing DAPL to operate below the Lake Oahe waterway in North and South Dakota. DAPL is the biggest system carrying oil from the Bakken shale basin of North Dakota and Montana.

The Court also ordered the U.S. Army Corps of Engineers to conduct an environmental review, expected to be completed in March 2022, that will determine whether the line remains permanently open.

The current filing is hoping to sway Judge James Boasberg to keep DAPL open during that process.

The tribes argue that DAPL endangers their water supply from Lake Oahe.

Dakota Access says the line meets the energy needs of the Midwest and Gulf Coast and provides for the economies of North Dakota and other states.

The Corps of Engineers has not sought to shut the line.

The tribes must tell the court by April 23 whether they will respond to DAPL's filing. A decision on the tribes' request for the shutdown is expected in May.

(Reporting by Devika Krishna Kumar and Laila Kearney in New York and Shubham Kalia in Bengaluru; Editing by Christian Schmollinger)