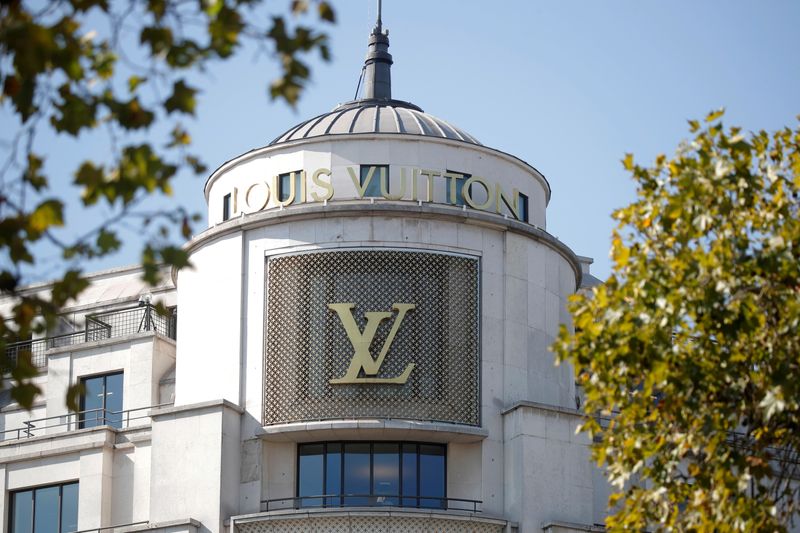 FILE PHOTO: A Louis Vuitton logo is seen outside a store on the Champs-Elysees in Paris, France, September 18, 2020. REUTERS/Charles Platiau/File Photo

By Silvia Aloisi and Sarah White

PARIS (Reuters) - Sales at French luxury goods group LVMH bounced back far more quickly than expected in early 2021, carried by demand for Louis Vuitton handbags and Dior products as Chinese and U.S. shoppers made the most of an easing of COVID-19 restrictions.

A freeze in international tourism triggered by the pandemic added to the pain of store closures for the luxury industry last year, and the crisis had raised concern that consumers might lose their appetite and spending power for high-end wares.

LVMH, the sector's biggest company and owner of more than 70 brands ranging from Moet & Chandon champagne to Guerlain cosmetics, on Tuesday posted first-quarter revenues that even exceeded 2019 levels, before the pandemic.

Its like-for-like sales, which strip out the effect of currency changes and its acquisition of U.S. jeweller Tiffany, rose by 30% year-on-year in the three months to March to 14 billion euros ($16.70 billion).

That was nearly double an analyst consensus forecast for 17% growth cited by UBS. Compared with pre-pandemic levels and the first quarter of 2019, like-for-like sales were up 8%.

Sales in Asia, excluding Japan, were up 86% from year-ago levels, and in the United States, which is rolling out a massive stimulus programme, revenues rose 23%.

That contrasted with a 9% drop in Europe in the period, where economies are also expected to recover this year, but some countries, including France and Italy, have brought in new lockdowns to control rising infection rates.

Across much of Asia, stores have been open since last spring. Luxury customers have begun buying more pricey goods online too, which helped Vuitton for instance, though LVMH said this remained a minor factor overall.

"Nothing replaces store visits, you can just improve it with a visit before online," finance chief Jean-Jacques Guiony told a conference call with analysts.

LVMH's revenues had dropped by 16% last year, and its airports duty free business is still struggling.

But its fashion and leather goods division, which houses Vuitton, Dior and brands such as Fendi and which accounts for nearly half of LVMH's revenues, recorded a 52% increase in like-for-like sales, again way above analysts forecasts of a 27% rise.

The watches and jewellery division's sales rose by 138% when including acquisitions and exchange rate effects, benefiting from the consolidation of Tiffany.

LVMH completed the $15.8 billion acquisition in early January after a legal battle.

Asked about more potential purchases in the luxury goods sector, including brands such as Armani, Guiony brushed off suggestions LVMH was ready to pounce again and said the group was focused on integrating Tiffany.