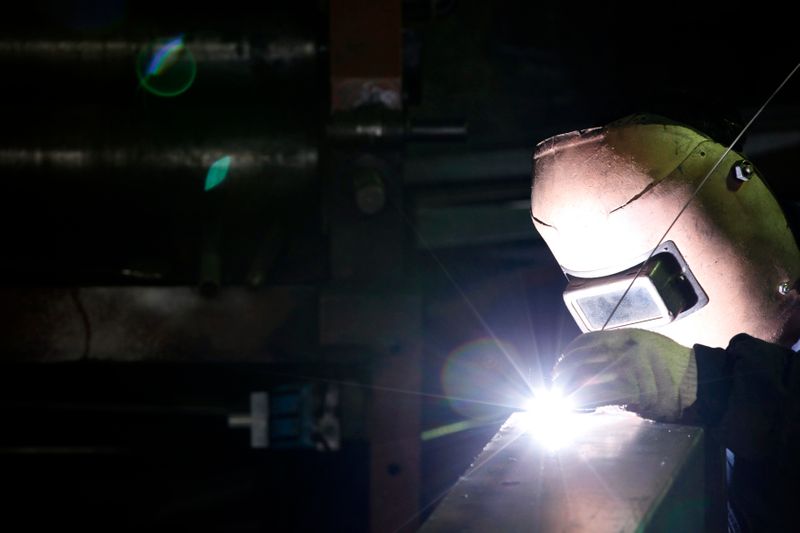 BEIJING (Reuters) -Profits at China's industrial firms nearly doubled in March from a year ago, as demand for raw materials surged along with the economic recovery, official data showed on Tuesday.

The pace of growth slowed from the first two months of the year. Profits grew 179% in January-February compared with the same period in 2020. This year also saw more production than usual around the Lunar New Year holiday period as workers stayed put due to COVID-19 concerns, rather than going back home.

Strong profits in raw materials extraction and processing industries, in particular chemicals, metals and petroleum, helped drive overall industrial profit growth in March as demand picked up, said Zhu Hong, an official at the NBS in a statement.

"There are still fairly large uncertainties in the global epidemic trend and the international environment, and the recovery between industries is still uneven ... the price of raw materials has been rising significantly, increasing cost pressures for enterprises," said Zhu.

Upstream sectors' profits may outperform those of their downstream counterparts due to higher raw materials costs in the near future, said analysts at Goldman Sachs in a note.

China's gross domestic product quickened sharply in the first quarter and posted a record growth of 18.3%, driven by stronger demand at home and abroad.

However, the data undershot the 19% forecast by economists in a Reuters poll, and analysts expect the brisk expansion, heavily skewed by the virus-related plunge in activity a year earlier, to moderate later this year.

Many analysts, however, believe China's export growth could lose some momentum as industrial production recovers from pandemic-related disruptions in other countries.

Liabilities at industrial firms were up 9.0% year-on-year at end-March, versus 9.4% growth as of end-February.

The industrial profit data covers large firms with annual revenues of over 20 million yuan from their main operations.

The figures combine data for January and February to exclude distortions caused by the week-long Lunar New Year, which fell in February in 2021.