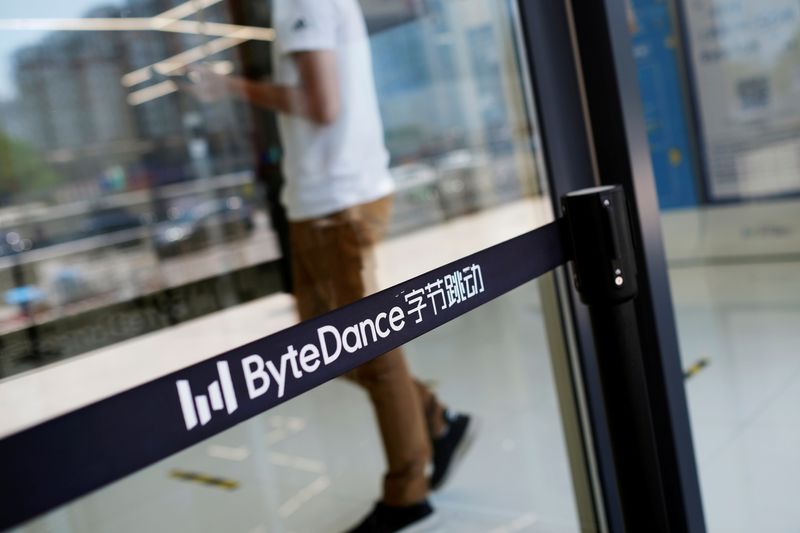 FILE PHOTO: A man walks by a logo of Bytedance, the China-based company which owns the short video app TikTok, at its office in Beijing, China July 7, 2020. REUTERS/Thomas Suen/File Photo

By Yingzhi Yang and Tony Munroe

BEIJING (Reuters) - Chinese TikTok-owner ByteDance is making plans to develop semiconductors, according to the company's job postings and a source familiar with the situation.

The plan is still at an early stage and the company's focus is on Arm-based server-side chips, the person told Reuters.

Beijing-based ByteDance has posted a dozen semiconductor-related job advertisements on its official website, based mainly in Beijing and Shanghai.

The company has established a team to explore the development of artificial intelligence chips, ByteDance told Chinese business magazine Caijing.

ByteDance did not offer immediate comment when contacted by Reuters.

Chinese technology giants are stepping up efforts to design their own chips in a sign of China's ambitions to reduce its dependence on foreign producers such as Qualcomm Inc and Nvidia Corp.

China is the world's largest purchaser of semiconductors but its ability to produce chips domestically lags behind the United States, Japan and South Korea.

According to research firm ICInsights, of the $143 billion in chips sold in China in 2020, only $22.7 billion worth were produced in China, and only $8.3 billion was produced by Chinese-headquartered companies.

Chinese search engine giant Baidu has completed a round of financing for its Kunlun AI chip unit, which values the unit at around $2 billion, Reuters reported on Monday

Baidu is also considering making the unit a standalone company to commercialise its chip design capabilities.

China's AI unicorn SenseTime started work on developing homegrown AI chips after being added to a U.S. trade list by Washington in 2019, Reuters has reported.

(Reporting by Yingzhi Yang and Tony Munroe in Beijing; Editing by Stephen Coates)