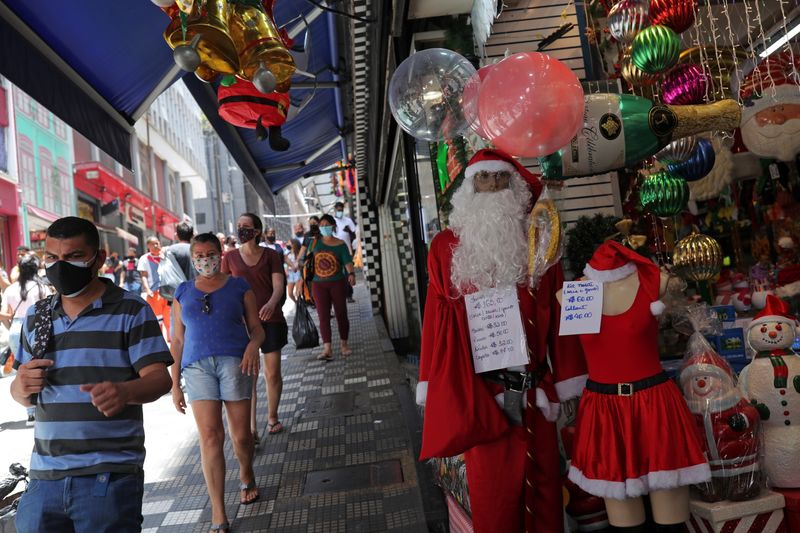 BRASILIA (Reuters) - Brazil's economic activity surged in February, a central bank index showed on Monday, one of the strongest gains on record and a sign that the economy had been humming along nicely before it was hit by a deadly second wave of the COVID-19 pandemic.

Economy Minister Paulo Guedes has pointed to record tax collection and formal jobs in January and February as evidence of this. Now he can add the IBC-Br activity index, a leading indicator of gross domestic product.

The index rose a seasonally adjusted 1.7% in February, marking the tenth consecutive month of growth and following on from the previous month's upwardly revised 1.3% rise.

It was the ninth largest gain since the series began in 2003, according to Refinitiv data. By this measure, Latin America's largest economy in February was back to the size it was in March 2015.

The seasonally adjusted index in February stood at 143.24, higher than the 139.98 in February last year before the COVID-19 pandemic brought the economy to a standstill and triggered the biggest annual decline in activity since 1990.

The central bank chart above shows, however, that despite this strong rebound, Latin America's largest economy as measured by the IBC-Br index is still 3.7% smaller than it was at its peak in December 2013, on a seasonally adjusted basis.

The immediate outlook remains uncertain, as the second wave of the pandemic shows no sign of abating, unemployment remains high, and emergency government aid to millions of poor people will be only a fraction of last year's payments.

The IBC-Br index was up 1% on a non-seasonally adjusted basis from February last year, the central bank said.