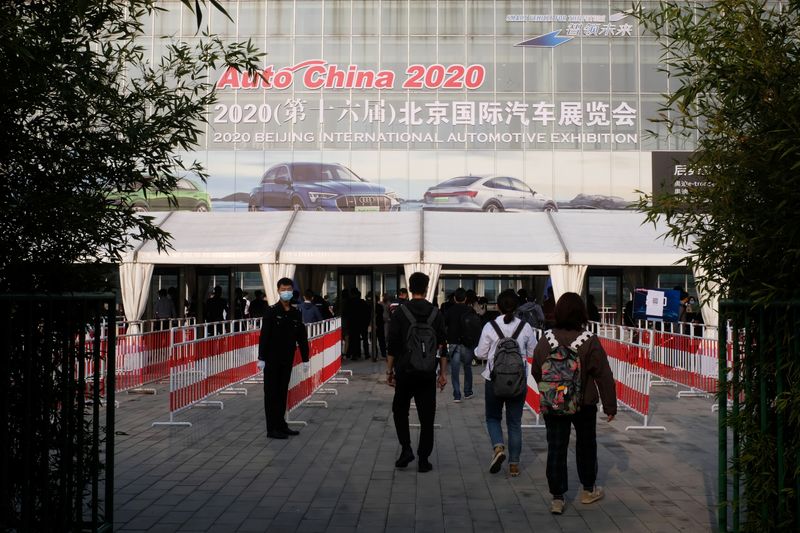 By Yilei Sun and Norihiko Shirouzu

BEIJING (Reuters) - China's auto market has rebounded smartly from the COVID-19 crash in recent months, executives said on Saturday, as a rare in-person trade show was dominated by talk of recovery in the world's biggest car market.

While conditions have improved vastly from lockdowns that froze economic activity in the country where the pandemic erupted, the Beijing autoshow is a far cry from the usual ebullience as fewer attend, new models are scant and prospects remain uncertain.

Doubts remain over the durability of the recovery, but the focus for now is on bright spots such as strong demand for mid-sized to large luxury vehicles and a flood of interest - and investment - in electric vehicles.

"The recovery in the Chinese market has been very remarkable, and our key segments have returned to the previous year's level if not slightly better," Nissan Motor Co <7201.T> CEO Makoto Uchida told a news conference via a video link from Japan.

"I expect this rebound to continue, but we need to watch for signs of trouble," said Uchida, who announced Japan's second-biggest carmaker would launch a number of new vehicles in China over the next five years as it struggles to return to profit.

China's auto sales rose 11.6% in August from a year earlier, the fifth straight monthly rise after plunging during the lockdown.

When almost all residents were told to stay home in February, sales collapsed by a record 79% to their lowest since 2005.

China's typically busy car-buying season, "Golden September, Silver October", is off to a good start, according to preliminary data, with passenger car sales up 12% in the first 20 days of September.

The rebound means this year's sales will fall less than 10%, the China Association of Automobile Manufacturers estimates, better than its May forecast of a 15% to 25% decline.

Premium vehicles accounted for a record 15% of the Chinese market in August, up from around 10% for all of last year, the China Passenger Car Association said.

Electric vehicles are also providing buzz to the Beijing show, as a boom in Tesla (NASDAQ: TSLA) shares has propelled interest in China.

But the recent improvement reflects Chinese carmakers making earlier model launches as they could not wait for the usual hype from the delayed autoshow before going to market. That suggests a more limited upside to the current sales rise.

"This year's auto sales are very different from previous years," said LMC Automotive senior analyst Alan Kang. "Many cars were sold during summer because customers delayed purchases after the lockdown."

"Sales performance in these two months will give us a clue of what will happen next," said Zhang.