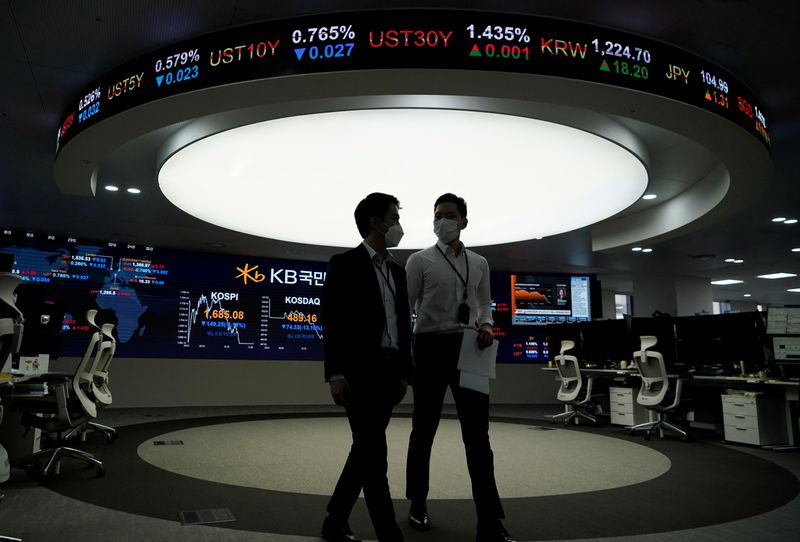 (Reuters) - Overseas investors turned net buyers of Asian equities in April for the first time this year, helped by signs of economic recovery, with the region posting a strong rebound in manufacturing activity and exports.

The inflows, however, were modest as investors maintained a cautious stance amid risks thrown up by the coronavirus pandemic.

Foreigners were net buyers of a combined total of $367 million in South Korean, Taiwanese, Philippine, Thai, Vietnamese, Indonesian and Indian stocks last month, data from stock exchanges showed. That compares with an average monthly inflow of $3.7 billion in the second half of last year.

South Korea, Taiwan, Indonesia, and Vietnam showed a rise in their manufacturing activity in April, helped by a surge in overseas demand for their goods, with developed economies making a fast recovery from the pandemic fallout.

Taiwanese equities led the region, with inflows worth $1.9 billion in April, with the economy posting its highest quarterly growth in more than a decade as demand for its tech exports surged.

However, Indian equities faced outflows worth $1.3 billion, with the country facing the world's biggest surge in coronavirus cases.

India's daily cases rose by a record high of 382,315 and its death toll also touched a high of 3,780 on Wednesday, raising more pressure on its government to impose a national lockdown.

Meanwhile, foreigners also sold Philippine shares for the 18th consecutive month in April, as a two-week lockdown in Manila and some other provinces hit its economic activity.

"The future outlook (for flows) remains uncertain amid another viral wave that is hitting India and its neighbouring countries," Daily FX's Yang said.

(Reporting by Patturaja Murugaboopathy and Gaurav Dogra in Bengaluru; Editing by Sherry Jacob-Phillips)