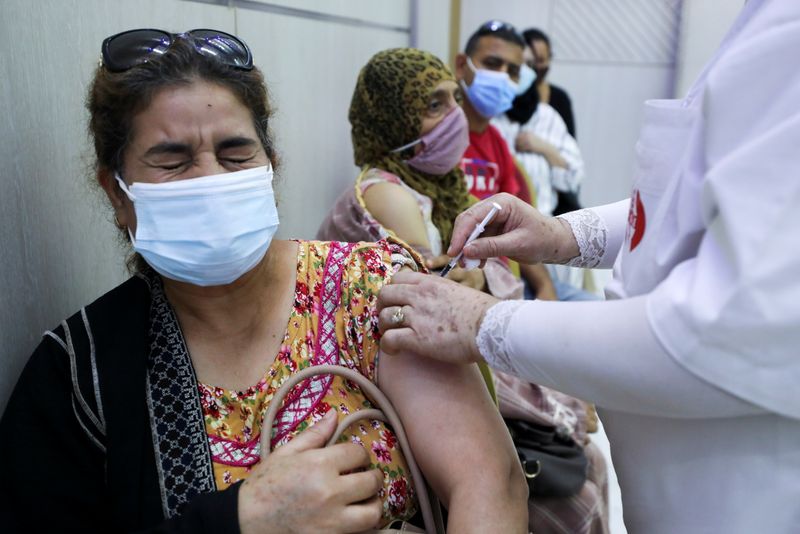 A woman receives the COVID-19 vaccine at a vaccination center in Tunis, Tunisia August 1, 2021. REUTERS/Ammar Awad

JENDOUBA, Tunisia (Reuters) - Waiting in line to receive a COVID-19 jab from the Tunisian army, Zubeir Bin Ammar was in little doubt that the military and President Kais Saied were succeeding where the government he removed from power had failed.

"May God bless the army and the president. I hope they let him rule because we live in a country that was run by mafia," said Bin Ammar, a teacher. He showed scant concern as to whether Saied's actions on July 25 constituted a coup and a threat to Tunisia's young democracy, as his political adversaries claim.

"He followed the people on the streets, not political parties," said Bin Ammar, who is married with children and lives in Jendouba, 150 km (93 miles) west of the capital Tunis.

Failures in dealing with spiralling COVID-19 cases in Tunisia stoked anger at the government in the weeks leading up to Saied's decisions to sack Prime Minister Hichem Mechichi and suspend parliament, with support from the army.

Coupled with a deep economic malaise, the COVID-19 crisis brought many Tunisians into the streets in protest at the government and the main parties in parliament, including the mainstream Islamist Ennahda, before Saied's decision.

So far, around 940,000 people have been fully vaccinated among a population of 11.6 million. Tunisia has reported around 18,000 deaths and more than half a million infections. At one point last month it had the worst infection rate in Africa.

During a recent religious holiday, the government opened walk-in vaccination centres, but was unprepared for the large numbers who showed up to get a shot and, as people crowded into dense queues without social distancing, the supplies ran out.

That debacle was the final straw for many people in the government's handling of the pandemic - and prompted Saied to announce soon afterwards that the military would take it over.

It proved a key moment in a long-running tussle between Saied and Mechichi in a system that gives the president direct control over foreign and military affairs while putting the government in charge of most domestic issues.

Tunisians had chafed for years at economic stagnation and deteriorating public services as politicians bickered. Saied, elected in 2019 as a political independent, was seen by many Tunisians as ready to challenge the dominant political parties.

When the pandemic descended on Tunisia last year, a tough initial lockdown delayed infections but hit poorer Tunisians by preventing them from working.

Subsequent attempts to impose lockdown measures were quickly rejected as unaffordable and the number of infections soared.

The hardship was felt most acutely in poorer regions like Jendouba in Tunisia's northwest that vaccines were slow to reach. Years of misgovernance had meanwhile undermined a public health sector that was once a point of national pride.

"In every household we have a funeral and we have pain and wounds," said Hatem Hawawi, whose 71-year-old aunt Mehreza died of COVID-19. He decried what he called years of government neglect to maintain the health system.

"We don't want to hold one or two people accountable. That doesn't work. The government did not give value to the citizen," he said.

Deploying the army to join the pandemic response appeared popular in Jendouba despite the possibility this could undermine the military's apolitical reputation - after it stood aside in 2011 to allow the revolution against an entrenched autocracy.

"They should have given this responsibility to the army (already)," said Ammar.