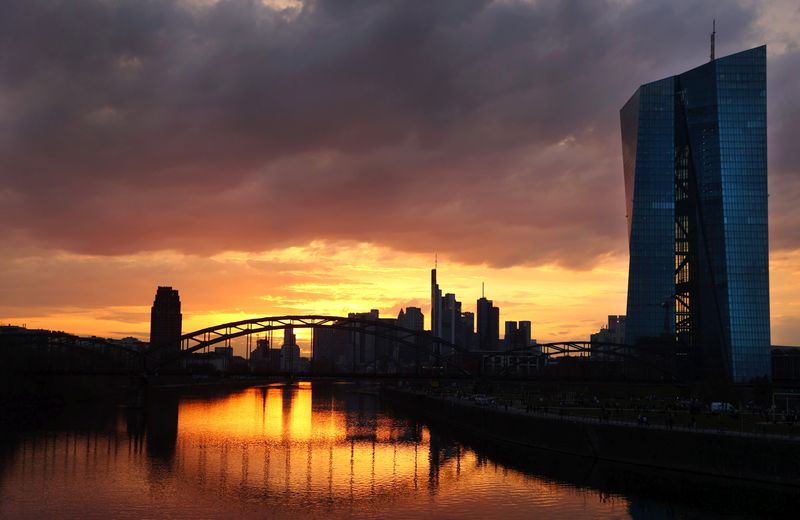 The headquarters of the European Central Bank (ECB) are seen during sunset as the spread of the coronavirus disease (COVID-19) continues in Frankfurt, Germany, March 26, 2021. REUTERS/Kai Pfaffenbach

FRANKFURT (Reuters) - Euro zone banks face potential climate hazards such as floods and droughts on up to a third of their loans to companies, with lenders in Greece, Portugal and Spain among the most exposed, the European Central Bank said on Monday.

The ECB study is part of a broader analysis of the risks that climate change poses to the financial sector, ranging from physical damage to changes in regulation or in consumer preferences.

It found that around 30% of euro area banks' corporate loan book is exposed to businesses located in areas where the risk of floods, droughts, extreme heat, wildfires or a rise in sea levels is high or rising.

"This may become increasingly relevant if emissions are not effectively reduced in the long run and if firms and economies fail to adapt to climate change," the ECB said.

With 18% of firms in Southern Europe highly or increasingly exposed to extreme heat, water scarcity or wildfires, banks in those countries emerged as the most exposed.

Some 80% of Greek banks and roughly 40% of Portuguese and Spanish banks were exposed to multiple risks, the ECB's study showed.

While two-thirds of loans to areas at high or rising risks are secured by collateral, half of that is made up of physical assets -- whose value is itself subject to those same hazards -- in sectors such as manufacturing and real estate

Only a third of climate-related economic losses in the euro area are insured, with that share falling as low as 12% in southern Europe, the ECB said citing Eurostat and NatCatSERVICE data.