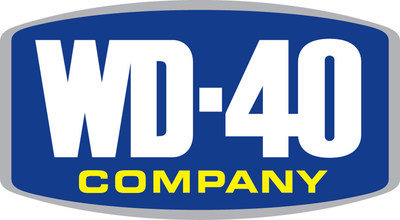 "We had a solid quarter with consolidated net sales up 7 percent from last year and in-line with our targeted compound annual growth rate," said Garry Ridge, WD-40 Company's chief executive officer.Â  "The Americas segment came in under our targeted growth rate for the segment because they had a particularly strong comparable period last year.Â  This is because in the third quarter of last year many of our customers in the Americas were buying high volumes of product in advance of our planned price increases in the region."

"Overall, we are pleased with the solid progress we have made for the year and remain confident that our strategic initiatives are well positioned to carry us into the future. While we continue to see fluctuations in certain markets from time to time, our long-term growth plans remain stable and we expect we will continue to deliver on our expectations," concluded Ridge.Â

Dividend and Share Repurchase As previously announced, WD-40 Company's board of directors declared on Tuesday, June 18, 2019 a quarterly dividend of $0.61 per share payable July 31, 2019 to stockholders of record at the close of business on July 19, 2019.

On June 19, 2018, the Company's Board of Directors approved a share buy-back plan. Under the plan, which became effective on September 1, 2018, the Company is authorized to acquire up to $75.0 million of its outstanding shares through August 31, 2020. The timing and amount of repurchases are based on terms and conditions as may be acceptable to the Company's Chief Executive Officer and Chief Financial Officer and in compliance with all laws and regulations applicable thereto. During the period from September 1, 2018 through May 31, 2019, the Company repurchased 132,184 shares at a total cost of $22.4 million under this $75.0 million plan.Â

This guidance does not include any future acquisitions or divestitures.

"We expect net sales may come in at the lower end of the range we've shared with investors due to the impacts of fluctuating foreign currency exchange rates," said Jay Rembolt, WD-40 Company's vice president and chief financial officer.Â "However, we have adjusted the provision for income tax to be between 19 and 20 percent due to favorable impacts from the US Tax Cuts and Jobs Act.Â  This adjustment enabled us to strengthen our net income and EPS guidance for the full fiscal year."

Webcast InformationAs previously announced, WD-40 Company management will host a live webcast at approximately 5:00 p.m. ET / 2:00 p.m. PT today to discuss these results. Other forward-looking and material information may also be discussed during this call.Â  Please visit http://investor.wd40company.com for more information and to view supporting materials.

About WD-40 CompanyWD-40 Company is a global marketing organization dedicated to creating positive lasting memories by developing and selling products that solve problems in workshops, factories and homes around the world. The Company markets its maintenance products and homecare and cleaning products under the following well-known brands: WD-40Â®, 3-IN-ONEÂ®, GT85Â®, X-14Â®, 2000 FlushesÂ®, Carpet FreshÂ®, no vacÂ®, Spot ShotÂ®, 1001Â®,Â LavaÂ®Â and SolvolÂ®. Â

Headquartered in San Diego, WD-40 Company recorded net sales of $408.5 million in fiscal year 2018 and its products are currently available in more than 176 countries and territories worldwide. WD-40 Company is traded on the NASDAQ Global Select market under the ticker symbol "WDFC." For additional information about WD-40 Company please visitÂ http://www.wd40company.com.

Our forward-looking statementsÂ include, but are not limited to,Â discussions about future financial and operating results, including:Â Â growth expectations for maintenance products; expected levels of promotional and advertising spending; plans for and success of product innovation, the impact of new product introductions on the growth of sales; anticipated results from product line extension sales; the impact of the "Tax Cuts and Jobs Act"; and forecasted foreign currency exchange rates andÂ commodity prices.Â Our forward-looking statements are generally identified with words such as "believe," "expect," "intend," "plan," "could," "may," "aim," "anticipate," "target," "estimate" and similar expressions.Â

Actual events or results may differ materially from those projected in forward-looking statements due to various factors, including, but not limited to, those identified in Part IâItem 1A, "Risk Factors," in the Company's Annual Report on Form 10-K for the fiscal year ended August 31, 2018, and in the Company's Quarterly Report on Form 10-Q for the period endedÂ May 31, 2019 which the Company expects to file with the SEC onÂ July 9, 2019.