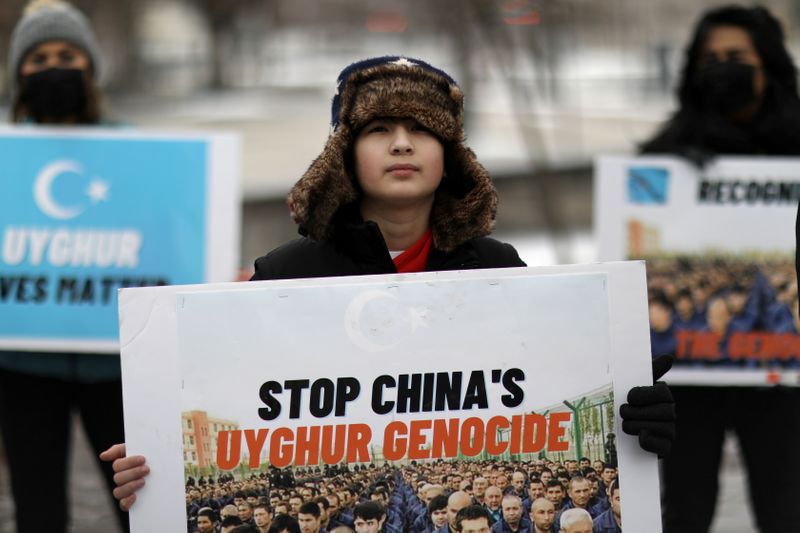 FILE PHOTO: People take part in a rally to encourage Canada and other countries as they consider labeling China's treatment of its Uighur population and Muslim minorities as genocide, outside the Canadian Embassy in Washington, D.C., U.S. February 19, 202

The U.S. Treasury Department named the officials as Wang Junzheng, secretary of the Party Committee of the Xinjiang Production and Construction Corps (XPCC), and Chen Mingguo, director of the Xinjiang Public Security Bureau (XPSB).

The two were targeted under the U.S. Global Magnitsky Human Rights Accountability Act, it said, adding that the move complemented actions taken by the European Union, Britain and Canada.

While the actions by the United States and others avoided targeting China's top leadership, it was the first coordinated move under the Biden administration, which took office in January and has vowed to work closely with allies in pushing back against China.

The move follows two days of "tough and direct" talks between U.S. and Chinese officials last week in Alaska, which laid bare the depth of tensions between the world's two largest economies at the outset of the Biden administration.

"Amid growing international condemnation, (China) continues to commit genocide and crimes against humanity in Xinjiang," U.S. Secretary of State Antony Blinken, who took part in last week's talks, said in a statement while calling on Beijing to end the repression of Uighurs and other minority groups.

Washington imposed sanctions on Xinjiang's Communist Party Secretary Chen Quanguo, a member of China's powerful Politburo, and five other officials in July, when it also targeted the XPSB and the XPCC.

"Chinese authorities will continue to face consequences as long as atrocities occur in Xinjiang,â Andrea Gacki, director of the Treasury Department's Office of Foreign Assets Control, said in a statement.

"Treasury is committed to promoting accountability for the Chinese governmentâs human rights abuses, including arbitrary detention and torture, against Uighurs and other ethnic minorities,â she said.

The Treasury statement said the XPSB had used repressive tactics against the Uighurs and members of other ethnic minorities in the region, including mass detentions and surveillance since at least 2016.

"Targets of this surveillance are often detained and reportedly subjected to various methods of torture and political reeducation," it said.