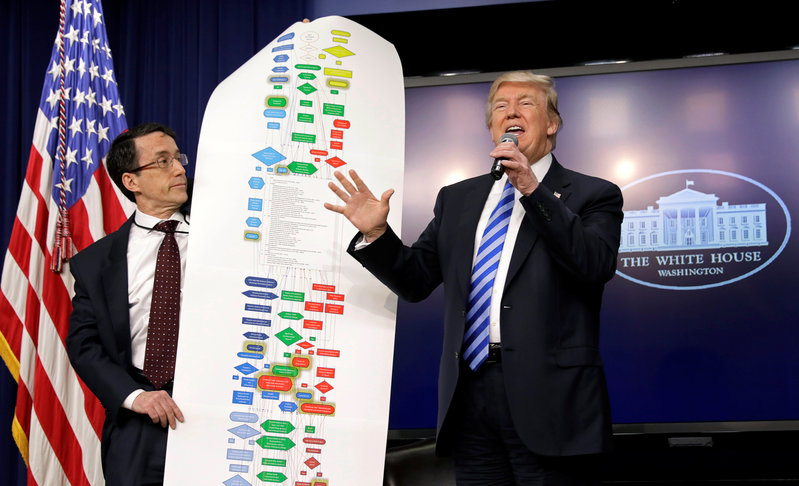 Special Assistant to the President for Infrastructure Policy DJ Gribbin (L) holds up a chart showing the regulatory steps to build a highway as U.S. President Donald Trump speaks during a CEO town hall on the American business climate at the Eisenhower Ex

WASHINGTON (Reuters) - President Donald Trump vowed on Tuesday to cut red tape to speed up approval of infrastructure projects and said his overhaul could top $1 trillion on roads, tunnels and bridges, one of his 2016 election campaign promises.

Trump, a real estate businessman before he was elected, did not provide further details on the amount or where the money would come from when he spoke to a White House meeting of 50 chief executives and other business leaders.

U.S. Transportation Secretary Elaine Chao said at the forum that the administration plans to release a legislative package in May. Investors have become more skeptical that the plan would win approval this year in Congress, which is controlled by Republicans who are traditionally wary of big spending.

Trump said building a highway can require dozens of approvals and take 10 to 20 years, a process he vowed to speed up. Trump said he would not fund projects that cannot be started within 90 days.

The administration wants to improve the electrical grid and water systems, rebuild airports, bridges, roads and potentially hospitals for military veterans and broadband.

National Economic Council director Gary Cohn told executives that privatizing air traffic control, which the administration proposed in its budget outline in March, "is probably the single most exciting thing we can do.".

Cohn, an investment banker with Goldman Sachs before he became Trump's top economic adviser, said it could help speed flight times and reduce fuel use.

Cohn said if cities "sell off" or privatize infrastructure assets, the administration could provide financial support.

"We're not on the cutting edge of this," Cohn said. "We've got to get a little more comfortable with public-private partnerships."