AUSTIN, Texas, June 14, 2022 /PRNewswire/ -- Tecovas, an Austin-based western footwear, apparel, and accessories brand, announced today that David Lafitte is joining the company as its Chief Executive Officer starting June 27. Lafitte currently serves as Chief Operating Officer at Deckers Brands, where he has led all global operations for its $3 billion portfolio of brands for the past seven years, including UGG, HOKA, Teva, and Sanuk. 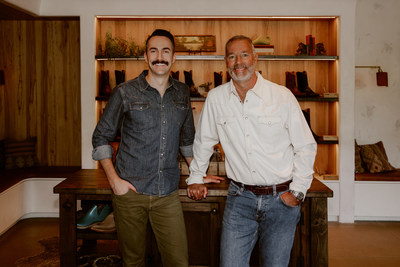 Lafitte joins the company after Tecovas achieved more than 70 percent growth in 2021 and anticipates over 40 percent growth in 2022. The brand is expected to achieve more than $200 million in gross sales in 2022 and open approximately 15 stores in the next 18 months, and Lafitte is the most recent hire in a string of new executive leadership team members who have been hired to execute the brand's growth vision over the coming years.

Paul Hedrick, who founded Tecovas in 2015 and has served as its CEO since then, has led the executive transformation at the company in recent months and will step into a full-time Executive Chairman role once Lafitte joins the team. In his new position, Hedrick will remain actively involved in guiding Tecovas' strategic direction and long-term vision, ensuring the brand stays true to its mission to create the highest quality products while leading the next generation of modern consumers into the evolution of western style.

"I'm incredibly excited to have David and our other new executives on board as we seek to expand our brand nationally over the coming years," said Hedrick. "Tecovas has grown from an idea into a nine-figure brand in under seven years – yet I've never been more bullish on our growth ahead. Our scale gives us the opportunity to invest in hiring so we can expand our retail footprint, expand product categories, and buy more inventory. With David's wealth of leadership experience, I'll be able to focus my time on the areas of the business where I can have the most meaningful impact – merchandising, design, crafting memorable Tecovas experiences, and building the Tecovas brand."

In addition to Lafitte, Tecovas has added four new executives to its leadership team in 2022. Gillian Kennedy joined the brand as Chief Marketing Officer from marketing roles at On Running and Tillamook Cheese; Paul Choi is Tecovas' new Chief Product Officer following recent leadership positions at Orvis and Ralph Lauren; former ALDO executive Nathan Cray has started as Chief Supply Chain Officer; and Kim Heidt is in the newly created role of Senior Vice President of Retail after serving as Head of Global Retail at Deckers.

"Tecovas is an exciting young brand with an enormous amount of potential and opportunity, and I do not see that slowing down," said Lafitte. "Thanks to the great foundation that Paul has laid, I'm looking forward to collaborating with him and the rest of the leadership team on further establishing the next great American footwear and apparel brand."

As Chief Operating Officer for Deckers, Lafitte sat on the executive leadership team since 2015; he previously served as the company's general counsel. During his tenure with the company, Lafitte developed a world-class supply chain organization, which helped Deckers grow revenues from $1.9 billion to over $3 billion and improve operating margins from 8.6 percent to 17.9 percent. Prior to Deckers, Lafitte was a shareholder with the law firm Stradling, Yocca, Carlson & Rauth, P.C., where he was a member of the firm's board of directors and executive committee. He received a J.D. from Tulane University and a bachelor's degree from University of Colorado.

About TecovasTecovas is an Austin, Texas-based direct-to-consumer brand bringing the spirit of the west to a modern consumer. Handcrafting the best western footwear, apparel, and accessories, Tecovas has grown rapidly since its founding as the first digitally native western brand in 2015, serving customers through www.Tecovas.com and 20 Tecovas stores across the country. Follow the Tecovas journey at @Tecovas.