Devolution - Connecting Players Across the World

Cape Coral, Florida--(Newsfile Corp. - November 27, 2021) - Devolution is helping players across the world to connect and play. Devolution takes users on a journey far into space, on the moon planet of Callisto, which is populated by these unique, never seen creatures with special abilities, join in the adventure, explore Callisto and collect their favorite Evomons. 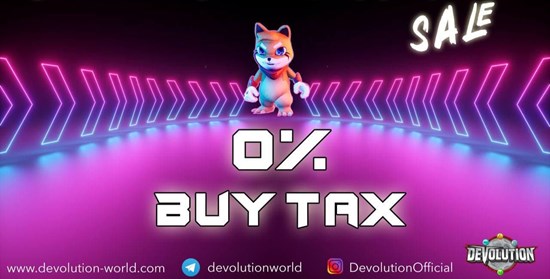 Currently celebrating an all-time high of $15 million in market capitalization, Devolution launched at $700 thousand market capitalization and did more than 21x from the launch, the project is still new and is debated to be an easy 100x gem. Apart from CoinMarketCap and CoinGecko listings, devolution is already listed on two popular central exchanges: Bitmart and Hotbit. Compared to the category leaders like Axie infinity, Devolution features 3D NFT based games that will have its metaverse soon, the contract for devolution has already been audited by CertiK, which is a pioneer in blockchain security, utilizing best-in-class AI technology to secure and monitor blockchain protocols and smart contracts.

Devolution is an online 3D PVE/PVP game that connects players across the world. The players can fight each other with their Evomons, these Evomons are accessible in the game, but there are multiple evolution forms for each Evomon, some of which can be purchased from the in-game store, which automatically awards users an NFT.

Devolution will host their NFT marketplace shortly; players can also grab the NFTs through the devolution box, raffles, or by trading. There are currently three rarity levels for Evomons: Normal, Rare, and Very Rare. The game will also feature level/power-up systems, tournaments & competitions, rewards-based challenges, and Guild/Clan functions as the game progresses further in development.

Why is Devolution bound to succeed?

Gaining widespread attention early on with the release of $DeVo, an online game where people buy and sell cats that continually have different combinations of genes leading to rare or desirable appearances.

Many games have been released since then with similar concepts, allowing people to purchase game items as if they were trading cards packs. These successful games illustrate the economic potential that $DeVo will create for matches based on it, the Idea behind NFT is not new but was coined when $DeVo became one of the best-selling apps, showing how individuals might want to collect certain types of tokens rather than just being able to exchange them as fungible tokens.

Games like Devolution provide another utility to these NFTs, it gives the people something else to collect outside the traditional cards while delivering a level of uniqueness among each item being sold within the Marketplace.

Devolution has already released four of their Evomons, Floki mon, Verdomon, Metamon, and trust. These Evomons have three different evolutions; some Evomons will also have extraordinary expansion beyond the Legendary Evolution.

5 percent goes to the development and marketing

1.5 percent will be used for In-game Rewards

And 0.5 percent will go to the Burn Wallet.

4 percent goes to the development and Marketing

1.5 percent will be used for In-game rewards

4 percent will be sent to liquidity to keep it stable

2 percent will be used for Buybacks

0.5 percent will go to the Burn Wallet.

A 0% buy tax event is running until November 30.

Devolutions gameplay trailer will appear in the next few days. The first demo will be released within a month. Devolution is working with an animation studio from the USA, which is active in Hollywood.

To view the source version of this press release, please visit https://www.newsfilecorp.com/release/105335