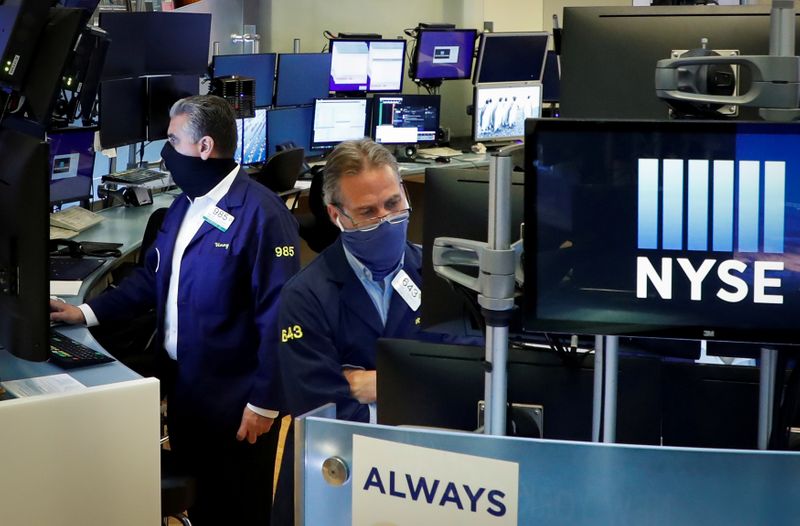 NEW YORK (Reuters) - The S&P 500 and the Nasdaq edged slightly lower on Wednesday as big tech stocks slid amid an ongoing rotation of portfolio holdings that gave a boost to energy shares and kept the overall market near record highs.

Stocks shrugged off remarks by Federal Reserve Chairman Jerome Powell, who reassured investors that interest rates will remain low for some time to spur the economy and jobs growth, but provided no new insights on monetary policy.

A change in market leadership is underway with the focus on big tech easing and sectors such as energy and financials gaining traction, said David Bahnsen, chief investment officer at The Bahnsen Group in Newport Beach, California.

"Is the whole market still reliant on big tech as it clearly was last summer? I think the answer is increasingly becoming 'No,' youâre seeing a broadening of market leadership," Bahnsen said. "You have over 75% of the S&P 500 trading above its 200-day moving average. Thatâs remarkable breadth."

The S&P 500 and Nasdaq both opened at record highs but soon drifted lower, while the Dow set a new peak during the session.

A wave of selling in high-riding Tesla Inc, down 5.3%, and declines of less than 1% in Amazon.com Inc, Microsoft Corp and Apple Inc, pulled the Nasdaq down and weighed the most on the S&P 500.

Powell is reiterating the Fedâs stance on staying with current rates until there is sustained inflation, said Jason Pride, chief investment officer for Private Wealth at Glenmede in Philadelphia.

"I donât think anything coming out there is surprising," Pride said.

Shares of cannabis companies soared as the Reddit forum that pushed GameStop to record levels late last month extended a months-long rally on bets of decriminalization under the administration of President Joe Biden.

Wall Street's fear gauge spiked to a one-week high of 23.85 points before paring some gains to close up 1.7%.

Twitter Inc rallied 13% after it forecast a strong start to 2021 as ad spending rebounds from a rock bottom.

The social media platform has considered whether to hold bitcoin on its balance sheet but has not made any changes yet, Chief Financial Officer Ned Segal told CNBC.

"The big question is sensitivity to valuation," said Bahnsen, adding that at 23 to 25 times forward earnings, there is no question certain stocks are highly valued.

Data on Wednesday showed U.S. consumer prices rose moderately in January but underlying inflation remained benign amid a pandemic that has fractured the labor market and services industry.

Lyft Inc jumped 4.7% after the ride-hailing firm said it is chopping costs and now expects to be profitable in the third quarter.

Advancing issues outnumbered declining ones on the NYSE by a 1.11-to-1 ratio; on Nasdaq, a 1.30-to-1 ratio favored decliners.