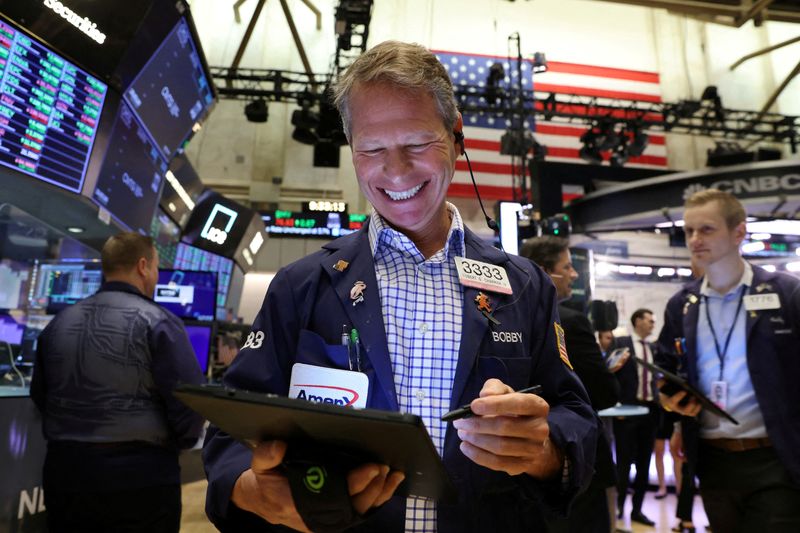 (Reuters) - Wall Street's main indexes soared on Friday in a broad rally as signs of slowing economic growth and a recent pullback in commodity prices tempered expectations for the Federal Reserve's rate-hike plans.

Stocks rebounded this week as financial markets have been roiled over worries that rapid rate hikes by the Fed to rein in 40-year-high inflation could cause a recession.

Still, investors have been gauging when the market might hit its bottom after the benchmark S&P 500 earlier this month recorded a 20% drop from its January closing peak, confirming the common definition of a bear market.

"Some of the moves, the sellers just get exhausted so you don’t have as much capital moving out," said Shawn Cruz, head trading strategist at TD Ameritrade.

"This might be a little bit of a relief rally," Cruz said. "But I think I would not encourage anyone to start going in with both hands at the moment, because we have seen this repeatedly where these things can reverse themselves pretty quickly."

Volume surged towards the end of the session as the close of trading marked the completion of FTSE Russell's reconstitution of its indexes that are tracked by trillions of dollars in investor funds.

U.S. consumer sentiment fell to a record low in June, but Americans saw a marginal improvement in the outlook for inflation, a survey showed on Friday. Data on Thursday pointed to slowing U.S. business activity in June.

Helping ease inflation fears was a sharp drop in commodity prices this week. The Refinitiv/CoreCommodity Index, which measures prices for energy, agriculture, metals and other commodities, fell to a roughly two-month low on Thursday after hitting a multi-year peak earlier in June.

Fed funds futures traders are now pricing for the benchmark rate to rise to about 3.5% by March, down from expectations last week that it would increase to around 4%.

"The expectation of future rate hikes coming down is part of the equation that makes today’s equity market so strong," said Peter Tuz, president of Chase Investment Counsel in Charlottesville, Virginia.

Bank stocks rallied, with the S&P 500 banks index rising 3.7%, after the Fed's annual "stress test" exercise showed that the lenders have enough capital to weather a severe economic downturn.

Advancing issues outnumbered declining ones on the NYSE by a 4.66-to-1 ratio; on Nasdaq, a 2.15-to-1 ratio favored advancers.

More than 19 billion shares changed hands in U.S. exchanges, compared with the 12.9 billion daily average over the last 20 sessions.