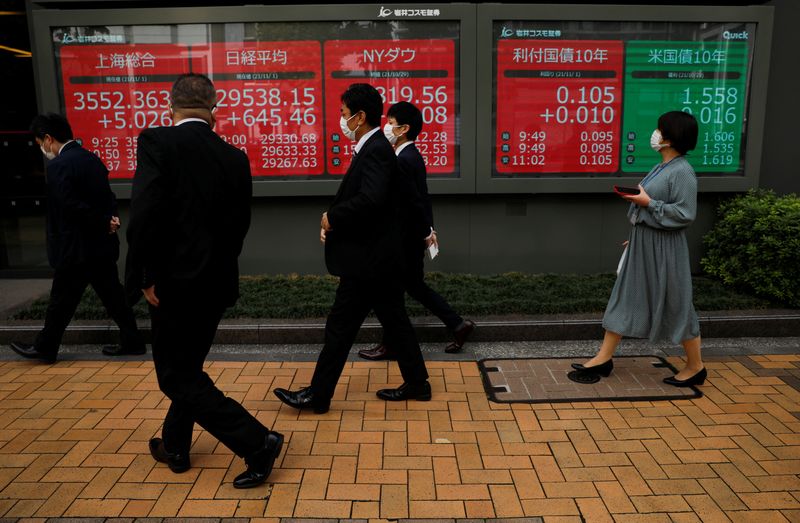 The dollar hit a six-day high as Treasury yields surged, while inflation fears were bolstered as oil prices rose to their highest since 2014 on possible supply disruptions after attacks in the Gulf increased an already tight outlook.

The jump in Treasury yields slammed U.S. and European technology stocks, while a drop in Goldman Sachs' stock led declines among U.S. banks after it missed quarterly earnings as the Fed slowed its asset purchases in November.

Two-year Treasury yields, which track short-term interest rate expectations, rose above 1% for the first time since February 2020 as traders priced in a more hawkish Fed before the U.S. central bank's policy meeting next week.

The two-, three- and five-year part of the yield curve will bear the brunt of expected Fed policy, said Tom di Galoma, a managing director at Seaport Global Holdings in Greenwich, Connecticut.

"The front end of the market is still way underpriced for Fed tightenings. The two-year note could be 1.5% by March," he said.

Yields have jumped since minutes from the Fed's December policy meeting showed it may raise rates sooner than expected and begin reducing its asset holdings to slow inflation and address a tight labor market.

Information technology was the biggest percentage declining sector on Wall Street, losing 2.48%, with interest rate-sensitive financials the second biggest, down 2.27%.

Tech stocks also weighed the most in Europe, falling 2.2%, as European shares fell to their lowest level in more than a week. The pan-European STOXX 600 index fell as much as 1.44% before paring some losses to close down 0.97%.

"We still have a bit of a ways to go to prepare for three rate hikes or four rate hikes. We haven't priced that in," he said.

Investors are increasingly pricing in as many as four Fed rate hikes this year, with the first seen coming in March, and one from the European Central Bank.

However, "history is a great guide, but it's never gospel," he said.

Oil was the only positive sector on Wall Street as Brent crude prices hit $88 a barrel after Yemen's Houthi group attacked the United Arab Emirates, escalating hostilities between the Iran-aligned group and a Saudi Arabian-led coalition.

Japan's yen initially fell after the Bank of Japan said it would stick to its ultra-loose monetary policy, despite hopes the economy is finally kicking clear of deflation.

Russia's rouble, highly volatile recently, firmed 1.18% to 76.9395 a dollar after reports the West was no longer considering cutting Russian banks off from the Swift global payments system and was instead eyeing sanctions on banks.