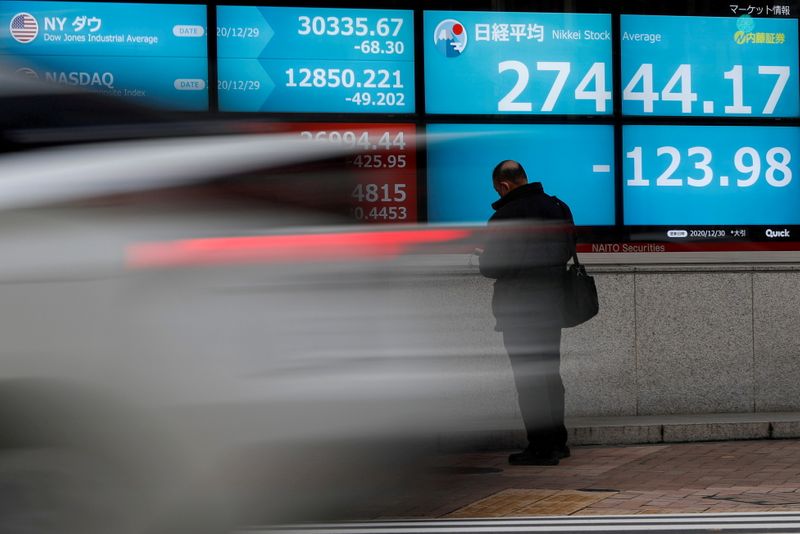 FILE PHOTO: A man stands in front of a screen displaying Nikkei share average and the world's stock indexes outside a brokerage, amid the coronavirus disease (COVID-19) outbreak, in Tokyo, Japan December 30, 2020. REUTERS/Issei Kato//File Photo

NEW YORK (Reuters) - Global shares fell for a third day in a row on Tuesday, with tech stocks plummeting, as anxiety over when central banks might raise interest rates led to rising bond yields on both sides of the Atlantic.

U.S. Treasuries extended their sell-off into a fourth day with the 10-year yield reaching a level last seen in mid-June. [L1N2QU21M]

U.S. Federal Reserve policymakers last week projected that they are ready to raise rates in 2022 and that the bank is likely to begin reducing its monthly bond purchases as soon as November.

MSCI's gauge of stocks across the globe shed 1.85%.

The Nasdaq Composite index of tech stocks and the S&P 500 index saw their worst daily falls since March and May respectively and were on track for their biggest monthly declines since September 2020.

Tech stocks usually fall when bond yields are rising because they have higher valuations and are most reliant on future growth, which can be curtailed by higher interest rates.

Traders were left wondering whether the declines were the start of a broader market pullback or just a blip.

"We're at the crossroads here," said Dennis Dick, a trader at Bright Trading LLC. "It's hard to say (if this pullback will continue) because every time we think here's a correction, the market just rides the dip."

"The selloff on bond markets is related to markets reading recent statements from the Fed and the Bank of England as being more hawkish with a view to the timing of rate hikes," said Sarah Hewin, senior economist at Standard Chartered Bank.

Brent oil dipped after topping $80 per barrel for the first time in nearly three years, as a five-day rally ran out of steam.

Earlier in Asia, shares were mixed as the fallout from Chinese property developer Evergrande's debt crisis and a widening power shortage in China weighed on sentiment.

Investors remain on edge over the future of Evergrande, which failed to meet a deadline to make an interest payment to offshore bond holders. Evergrande has 30 days to make the payment before it falls into default. Shenzhen authorities are investigating the company's wealth management unit.